For years I’ve wanted to go to Grace.  But I was never able to find any interest from anyone. People knew it was good but they were off chasing the newer restaurants.

I was talking to PepsiMonster once about it and he mentioned it was probably the only restaurant on Beverly he wanted to try. When the Blackboard Eats special came up for $38 for three courses, we made plans to go.

I arrived early and there were quite a few people in the lounge by the bar. There were only a few tables occupied which worried me. But at the same time, even though it was my first time at this restaurant, it felt like coming home. The maitre’d was extremely friendly and our server was great. He even took time to explain how to make the 1785 cocktail I was having (equal parts of Buffalo Trace bourbon and Lillet Blanc, rim the glass with an orange peel and garnish).

Grace had the BBeats special already printed on menus (that we later asked for and warmly told to keep).

Of the three courses, the soup was my favorite. The creamy soup went well with the pumpkin seeds and pomegranate seeds. I loved the texture of it. It was so silky smooth and yet not overly heavy with too much cream. 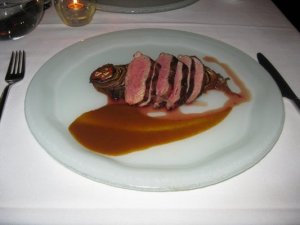 I really enjoyed the lamb as well. It was perfectly cooked to a medium rare. I felt the meat was well-seasoned and it didn’t need the sauce but it definitely added to it. The byaldi confit, the wonderfully thinly sliced veggies, were great. I did think the charred tomato nage left the onions the veggies were sitting on a bit wet but I suppose that comes from the poaching.

We ended with the poached pear with a blood orange syrup. I liked the buttermilk ice cream sandwich the best with the sprinkly of oat praline. I had thoughts about picking up the sandwich to eat but decided to just use a fork since I was in the “gracious” setting of Grace.

I really thought the decor transcended the “Asian” style. Everything hinted at it down to the wooden armoires but it never quite felt like I was sitting at a Chinatown restaurant. Graceful indeed.

Service was phenomenal. The maitre’d and our server/bartender were friendly and happy the whole time we were there. The maitre’d helped me to the restroom and also ran out with my valet ticket so I didn’t have to wait in the cold. That is some service!

At some point, Neal Fraser came out to greet one of the tables. Oh my goodness, here was the creator of my favorite bacon potato salad at Cole’s! But I was struck by one thought. Oh, he’s much shorter than I had imagined but he still commanded the room.

I had a wonderful time at Grace and am grateful to have experienced it before it moves to Downtown L.A.

12 thoughts on “In Good Graces”