Olive at the Grafton in Hollywood

The Sunset Strip is home to many wonderful hotels and restaurants. I had the opportunity to check out the Olive, a new casual eatery inside the Grafton Hotel last week. The Olive has only been open about a month or so. They took over the old Boa space. 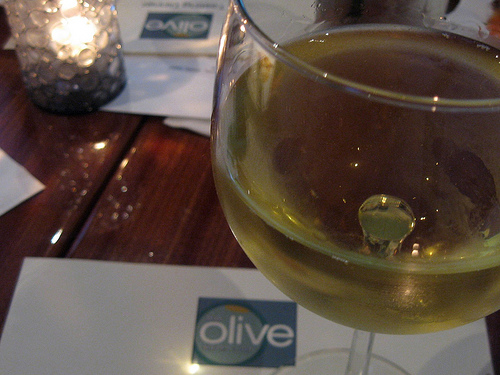 The wine list is quite accessible. I found most of the whites to be fun. My fave was the 2008 Vermentino from Argiolas Costamolino which a mere $10 a glass.  I also enjoyed the 2007 Cabertnet Sauvignon from Jekel.

The Olive served up a wonderful assortment of cured meats, cheeses, nuts, olives and the fennel flatbread was quite nice. I was starting to look forward to more appetizers.

I wasn’t disappointed with the bacon wrapped prawn which had just a touch of lemon oil and went well with the cheesy polenta. If I was vegetarian, I probably would go with the roasted beet and burrata. I could taste the sherry in the red beet puree.

If you want a quick bite, the Olive also offers pizzas. The pepperoni is a classic.

I’ve been enjoying scallops lately and the Olive sent out a pretty good version with risotto. However, it seemed they were known for the lobster mac and cheese, even going as far as having cartoon figures on their walls saying as much. I would have to return to see but our mac was cold and the short ribs agnolotti pasta had also gotten cold and hard while we waited for the scallops.

See that creamy green and pink thing? It was Minty! Wholly unexpected and a nice way to end. I ended up skipping the more carb-y bread pudding and somewhat dry chocolate cake in favor of that refreshing dessert.

The Olive at the Grafton Hotel

Update:
This tasting was courtesy of the Olive as part of a media dinner.  Recently, a version of this review was posted on a public review website. In that review, I explained exactly why some dishes were off. It was a fair review. I gave it an average of 3 stars. However, it ruffled some feathers.

I honestly would have gone back to the Olive. I understood why dishes were taking a long time to get to the table. When you’re offering a 5-course meal but under each course offering 2-3 items, this becomes a 10+ tasting. And with only one server for the table and the entire dining room, service while good was not fantastic. We were not informed when the dishes would be arriving. It was poorly executed.

By the time the pizzas arrived, they were turning carboard-y. And the main dishes? As mentioned, the lobster mac and cheese and short ribs pasta were virtually cold and hard. Who wants to eat that? But I tasted it and found it lacking. I did like the scallop and said as much.

Then the long wait which seemed interminable for dessert. At this point, even one of the PR execs left as well as several others. And what did we get as reward for those who stuck it out? A dry piece of cake, heavy bread pudding but as I did say, a nice minty creme brulee saved the night. But it could only save so much.

If you are a new restaurant and welcome suggestions to improve, I say you’re going to do well. But if you want to turn a blind eye on the “negative,” then keep doing it. There are plenty of restaurants in LA who can serve a much better pizza, fresh pasta and a nice dessert without $10 parking (and that’s with validation).

2 thoughts on “Olive at the Grafton in Hollywood”