People have asked me which has been my favorite Test Kitchen meal and it’s very hard for me to pick one favorite. The concept of having one permanent location with a cast of rotating chefs has proven to be a very successful concept. And although the kitchen is ever changing, it’s the familiar faces that welcome me when I go that keeps me coming back. I can count on good cocktails from Julian Cox and Brian Summers, both of whom seem to be at Test Kitchen more than their home bars, be warmly greeted by Deysi the hostess and Stephane Bombet the general manager as well as the greatest Industry networker I know, co-owner Brian Saltsburg. I also enjoy seeing the various servers I’ve become friendly with these last 10 weeks or so. 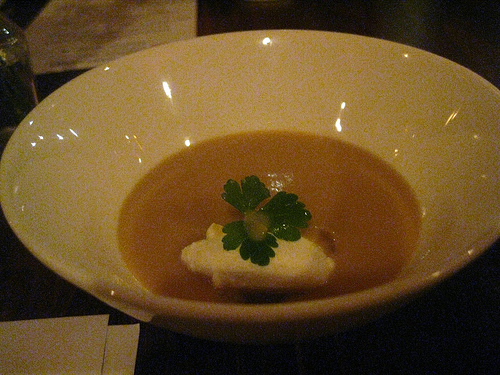 When I saw My Last Bite talk about an upcoming 9-course vegetarian Test Kitchen night with Gary Menes, I immediately texted my BFF Sophia LoRENEGADE. She and I enjoyed a wonderful dinner by Chef Gary at Marche a few months earlier. I only described my (meaty) meal but she actually did his vegetarian tasting. She loved his food so much, she followed him to Palihouse where he departed to after Marche. And since it was her birthday, I offered this as her present.

Sophia’s been vegetarian since she was 12 and finds what she misses the most are complex flavors. She thinks Chef Gary is a genius. And to hear him talk about something like a carrot is fascinating. First you must begin with the very best ingredients and bring out their natural flavors. But I think it shows his skill that he is able to do so. We started his Vegetarian Feast with an amuse bouche of faux tuna belly. This was actually watermelon and mint. It was light and refreshing.

Then we got a Japanese sweet potato and leek veloute. I remembered the chef as having great soups  from my previous meal at Marche. A server at that time explained to us how the chef spent hours developing his veggie stock. Sophia went nuts for this soup. She has declared she’s ruined forever.

The next dish, the carrot, spinach and artichokes was a punch of flavors. The carrot was sweet. The spinach was a bit too salty but I loved the preserved lemon evident in the purple artichokes. You had to eat all three in one bite to appreciate how they worked together. The sweetness of the carrot balanced out the slightly too salty spinach and the acidity of the lemon cut through it all.

The next dish, the cauliflower roti and puree was a mixture of apple, mustard seeds, brussel sprouts and a vinaigrette. I thought this dish was a bit mushy for me.

I was looking forward to the next dish of fennel, orange pernod and baby broccoli. The vegetables were on a bed of forbidden rice. I actually thought the highlight of this dish was the orange wedge that had been soaked in pernod. That was unexpected for me.

At this point, another Test Kitchen regular, photographer Ryan Tanaka came over to whisper how the pork belly was so great. Hm, I guess the squash from afar could be mistaken for pork belly. But no, the dreamy squash was accompanied by a treasure trove of wheatberries, grapes, dandelion greens and pickled shallots. I debated with Sophia about whether we could eat the twigs holding the berries. I went with no and she went with it’s just more fiber. 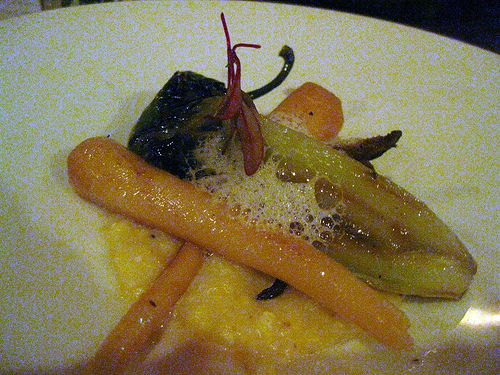 The parsnips was my fave course of the night. The warm roasted parsnips came with grilled shitake mushrooms and one padron pepper. Fortunately my pepper wasn’t too spicy. Sophia and I started waxing love of grits and polenta until we cleaned our plates. (future crawl?!) The shitake mushrooms were grilled to a nice crisp and lent a smokey flavor to everything.

Our last savory of the night was essentially kind of like a filling from a shepard’s pie or perhaps the stuff you’d see around Salisbury steak but obviously without the meat. There was a lot of butter in this but I missed the spring peas from the meal I had at Marche. These autumnal peas were tougher and I actually wished this was a stew and eaten with rice. The smoked pearl onions, potatoes and hearts of romaine would have been nice with a farro or barley as well.

I loved the sugar-coated quince. And the little spice cake was so great with the vanilla bean mascarpone and saba.

For cocktails, I tried the Artemis and Pear N’ Cider as well as the Herculean Autumn. The Herculean was described by Brian Summers to be like a Manhattan. It had a roasted pumpkin syrup that was housemade. I tried it on its own and could imagine a hot toddy made with it. A nice rum punch would be great with it.

Sophia picked two dealer choice cocktails. I have been keeping track of the charming names they’ve been calling “dealer’s choice.” This evening, the dealer’s choice was renamed “The Gift of Fire.”

Sophia said this was the best meal of her life. This was definitely one of my favorite vegetarian meals. We look forward to seeing more from Chef Gary.

My fave Test Kitchen nights- okay, all of them: