On Monday, I asked a coworker if she wanted to get lunch. The following was the actual conversation:

“Hey, did you bring lunch?”

“Where should we go?”

And we set out generally aiming for a Salvadoran restaurant we had seen. We didn’t end up there but walked into La Union. They have $1 pupusas on Mondays and Thursday making this a somewhat popular eatery. There were almost 10 different soups and though it was a freezing day, I decided to get the Pollo Guisado. Except they had no idea what I was talking about and they didn’t have it anymore (time for a menu update?). Next option? Carne Asada. For the hell of it, I got a pupusa too. There were four options and I got the queso con loroco (cheese with herb).

My coworker got the chicken with sour cream sauce which she declared delicious. Our plates were only $7 each and came with tortillas, salad, beans, rice, the actual dish and a soda. What a crazy deal.

My carne asada was grilled well and I liked the beans quite a bit. With a couple of shakes of Tapatio, I was all set.

La Union was having a lot of ventilation problems that day. The smoke detectors went off and the regulars kept eating their soup methodically taking bites out of their handmade tortillas (you also had the option of getting machine made ones). The tortillas a mano (handmade) were thick, almost like a non-filled pupusa. 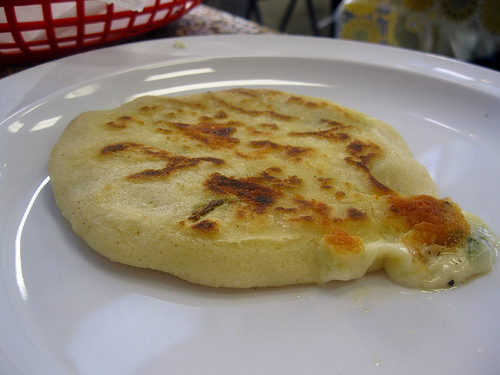 When my pupusa arrived, it came with curtido (the slaw) and salsa in little baggies. I generally love as much curtido as I can get but I accidentally squirted too much salsa on creating quite the soggy mess. 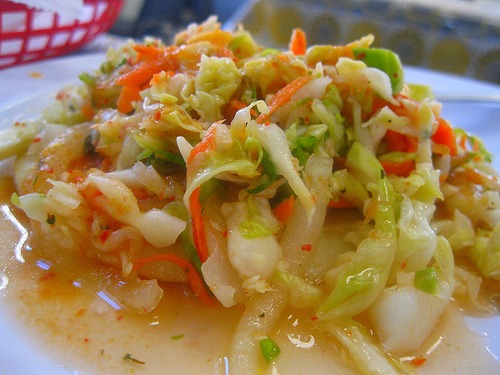 Despite initial communication problems, I’ll definitely be returning. They are open seven days a week and serve breakfast as well. I’d like to try their revueltas pupusa (taking care with the salsa next time!) and one of their many soups. Perhaps the fish or shrimp.