I became a member of Cana, a private cocktail bar part of the 213 Group a few months ago. But it’s taken me a while to get back to it. I finally made it back last week and was pleasantly surprised by a new list of cocktails.

A friend started with the Last Minute Fix (tequila, house hibiscus-vanilla cordial, lime, sloe gin, Castillian bitters). It’s a very pretty drink that came adorned with an orchid which she wore the rest of the night.

I had the Arawak Cocktail (Buffalo Trace bourbon, Dolin dry vermouth, tamarind curacao, pineapple, lemon, Angostura bitters). I like rum well enough but my first love is bourbon. And Cana does a respectable bourbon cocktail. I hate using the word exotic but it was different with the tamarind curacao.

My friend started round two with the Guavacita (Campo de Encanto Pisco, Yellow Chartreuse, fresh sours, guava, bitters). I liked that it came with a warning it contains egg whites. Another friend thought the egg whites would serve as a good base for the rest of the cocktails she was about to consume. Cana doesn’t have food but allows delivery from nearby Wokano. 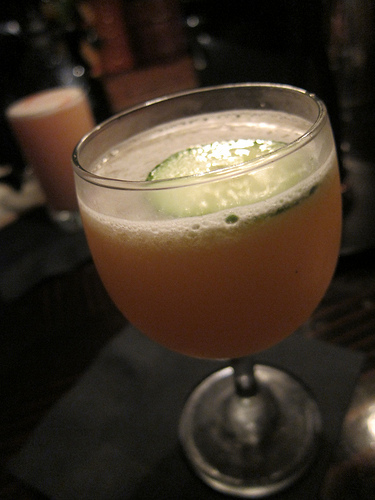 For my second and final drink of the night, I had the Far West (Don Q Anejo rum, Amaro Montenegro, lime, Oro Blanco-thyme syrup, white pepper). After friends tasted my cocktail, they decided this was the best of the night. It was definitely a tasty cocktail. I loved the white pepper in it.

All cocktails by Danielle.

A couple of notes: