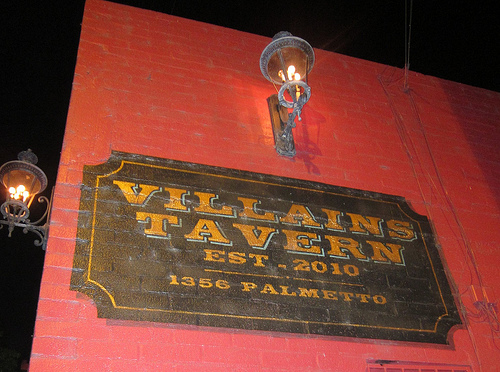 Villains Tavern opened last year and I knew I wanted to check it out because it was being described as “steampunk.” I have a thing for bits and bobs and thought the entry way was fairly amazing with all the colorful bottles. 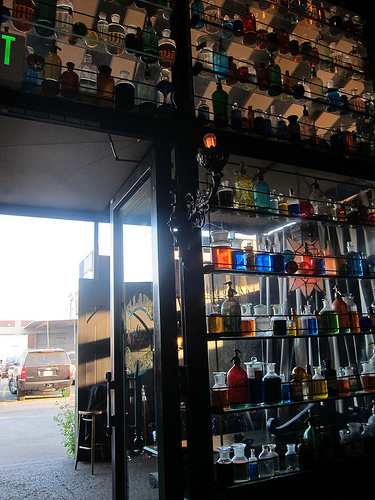 But because it was still fairly bright out, I didn’t get a hard-edged feel. 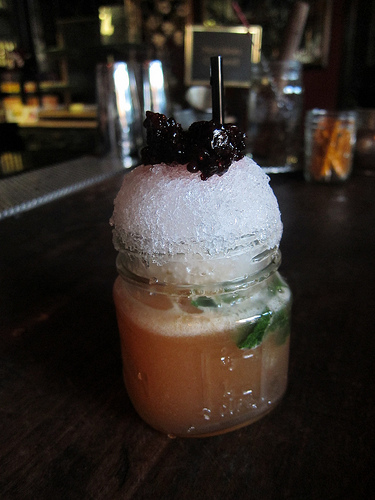 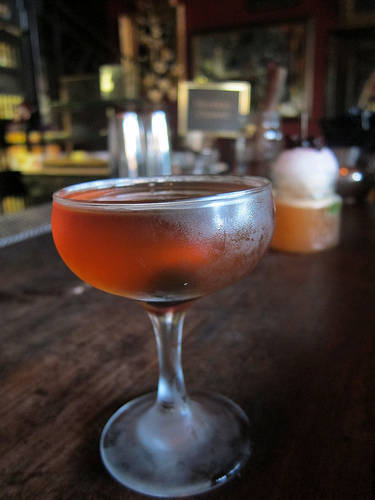 All the cocktails were created by former Seven Grand barman, Dave Whitton. We were helped by Roland this evening who steered me towards the Fatal Hour when I said I wanted something with bourbon or rye. My friend had the Belladonna, a beautiful drink that caused half a dozen people to inquire what it was.

Oh boy, my cocktail definitely had the “bone jarring experience” as stated on the menu. We better get some food.

On Tuesdays food truck Great Balls of Tires takes over the kitchen and was serving up tasting burgers and sliders. 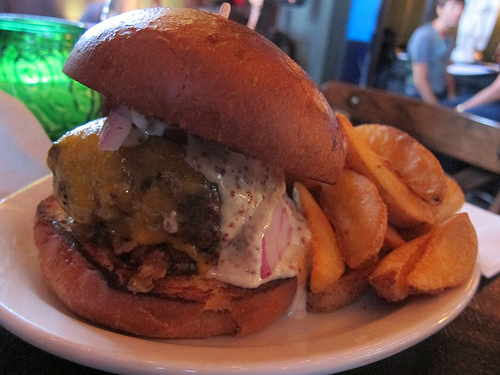 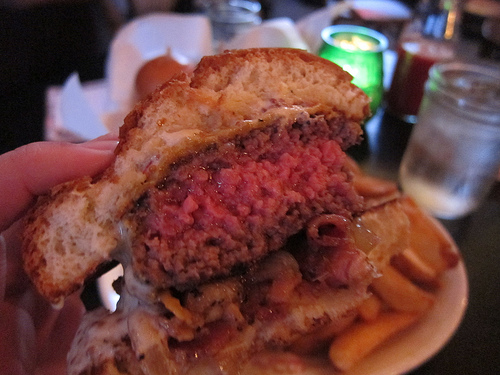 I didn’t realize Great Balls of Tires only served this massive burger at Villains. It was definitely a tasty burger and I enjoyed the fries. 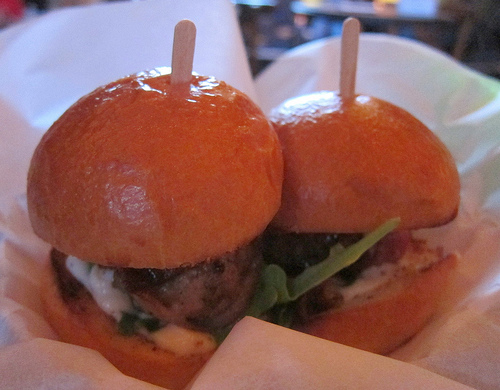 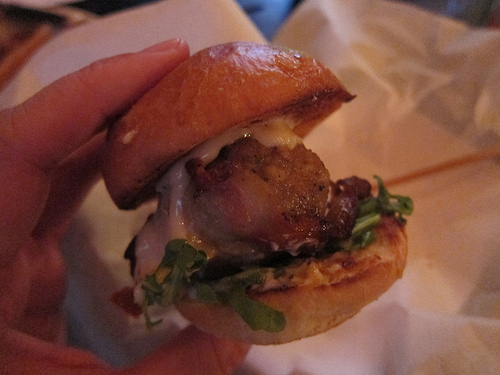 Now that we have a tummy full of food, it’s time for more cocktails. 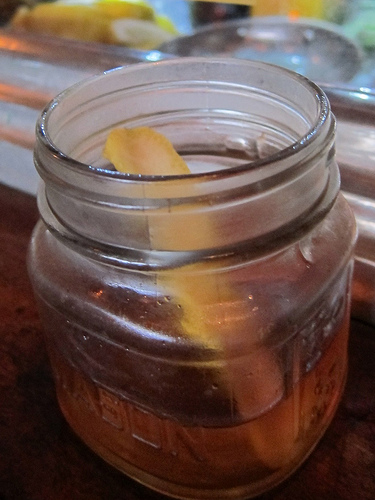 For our next round, my friend had the Penicillin (Famous Grouse Scotch, Islay Scotch, honey), Villain’s rendition of the famous New York bar, Milk & Honey. I decided to go with a bartender’s special. I asked for a cocktail to be made with Bols Genever and Roland served up a Bols Genever Old Fashioned.

I know how to pick ’em. Another fine cocktail! 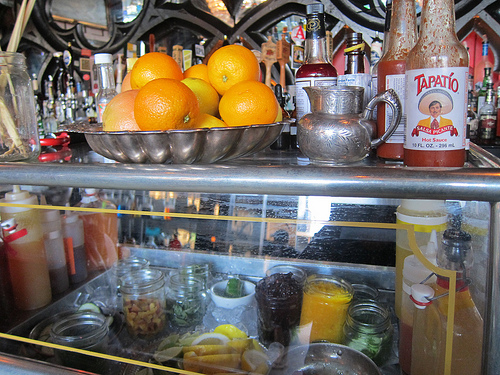 fridge for garnishes and such

I really liked that Villains had a fridge for their garnishes and such. It kept things nice and fresh.

And it was Trivia Night, presented by King Trivia. 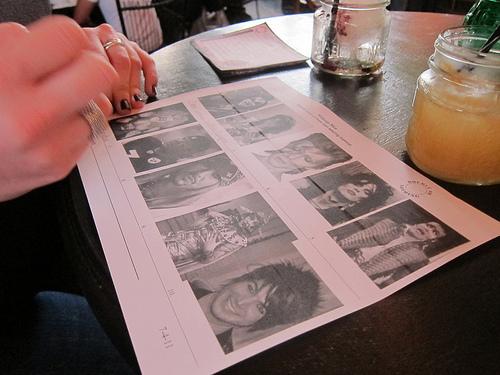 We had no idea it was going to be Trivia Night so we ended up playing. We named ourselves “Fine, We’ll Play Damn Trivia” for the lack of a better name, though Minty Sunset Strip would have been a nice combination of our nicknames. 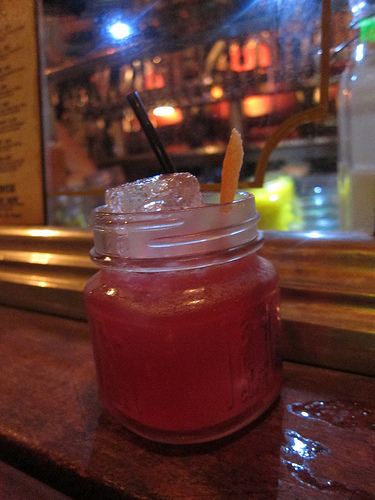 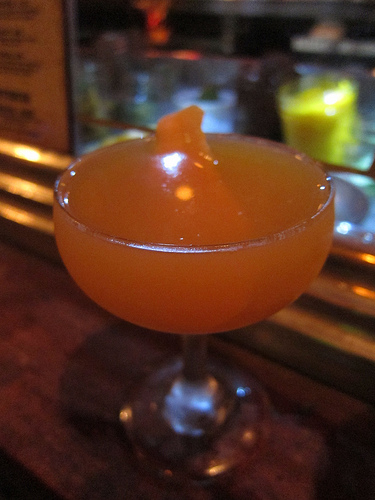 We made it to the other side of the menu to discover many of the cocktails were named after gods and goddesses. My friend had the Usha, a Vedic goddess best known for warding off evil spirits of the night. This well-balanced cocktail probably did more than ward off evil spirits.

I had the Geryon which in Greek mythology was a three-headed giant. I wonder what he would think if he knew he was also a sweet whiskey libation now?

Roland made the Geryon a little bit less sweet for me since I have a habit towards more bitter cocktails. While I liked this drink, I didn’t get as much citrus as I thought I would. 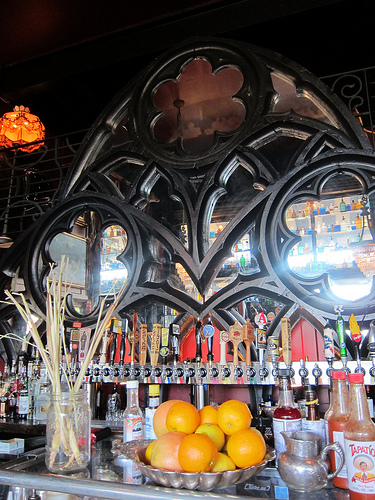 A look at the bar

If cocktails are your thing, Villains serves up a rather wide selection of beers on tap. 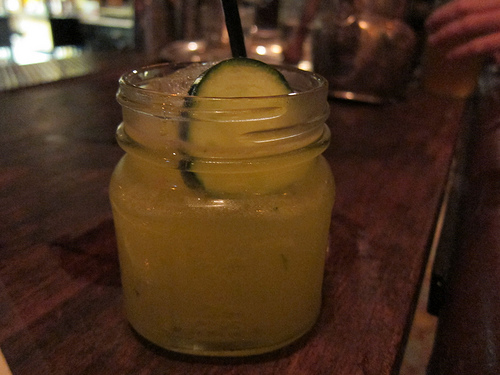 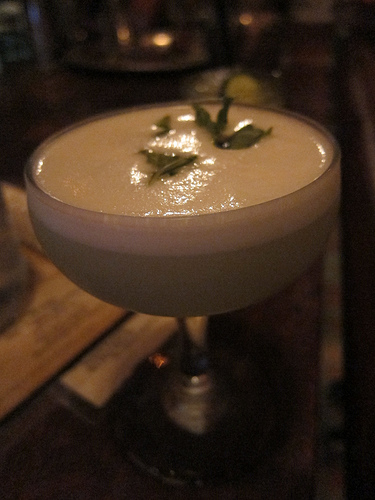 Trivia ended so we decided to take our drinks upstairs to scope out the main bar. My friend went with the Hanzo which is similar to an Eastside cocktail. I decided to go with an even lighter cocktail (notice how I work backwards?) and settled on the Isis.

My drink was beautiful and one of my favorites of the night after the Fatal Hour.

I’m really glad I made it out to Villains to play trivia, eat some great food and have some delicious cocktails. There’s plenty of free parking and if you don’t mind going off the beaten path, this is the perfect DTLA bar. If you’re ever in the Arts District, I would definitely put it on a crawl along with Tony’s Saloon and Wurstkuche.