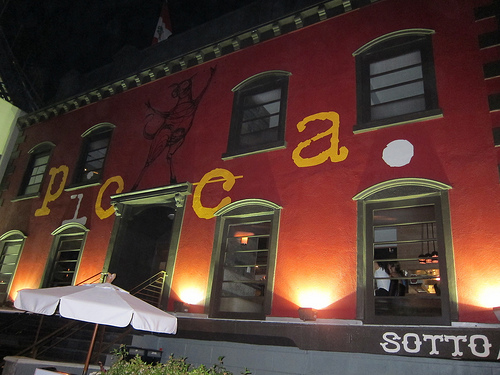 What’s the hottest new restaurant in L.A.? Picca! The highly anticipated modern Peruvian restaurant by Chef Ricardo Zarate opened late last month. Having tasted Chef Ricardo’s food at his more modest Mo-Chica, Test Kitchen and even at the Grilled Cheese Invitational, I knew was in for a treat when I went two weeks ago.

The Townhouse which houses the wonderful Sotto downstairs is now complete with the newly opened Picca upstairs. It would be hard to go to one without stopping by the other for a cocktail.

The space is beautiful. I adored the lamps, the cute village mural on the wall, the explanations of dishes on another wall, the open kitchen and the bar. I couldn’t decide which was the best seat because every corner had something interesting to look at.

We started off with a couple of cocktails. My friend went with the Chilcano de Anis. All the drinks were created by master mixologist Julian Cox who overseas the bar program at Picca, Sotto, Playa and Rivera. Here’s a great interview by the LA Times.

I thought the cocktail menu was really fun because instead of a basic description, they’re actually recipes on how the drinks are made.

We started off with some veggies because I figured the rest might be a tad protein heavy. The grilled vegetable salad was a light way to begin. The dressing was really good. And as our server Molly said, if you’re a fan of mushrooms, you’ll like this salad.

I could sit and eat these causas for days. I’m familiar with Chef Ricardo’s causas at Mo-Chica where the potato is mixed with aji amarillo (causing the bright yellow color) and then layered with seafood. At Picca, he turns the causa as a bed for his “sushi,” giving a nod to his days of working at high-end Japanese restaurants.

We couldn’t decide what “sushi” to get but decided on the scallops which were amazing. I ate my bite so fast, I wanted another but I knew we had more food coming. Here’s a pic of shrimp and spicy tuna causas I had a few days later. 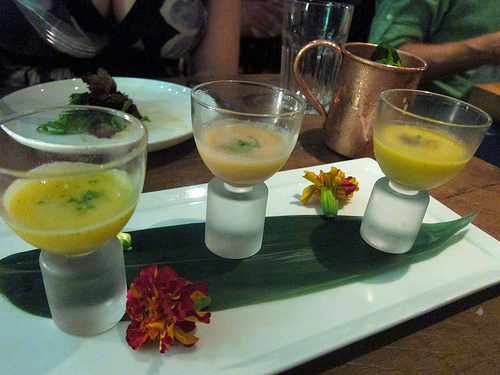 At Chef Ricardo’s Test Kitchen Cebiche night, I fell in love with his leche de tigre with sea urchin and scallops. He brings back the dish with aji amarillo, rocoto and sea urchin. Leche de tigre is a Peruvian marinade often served with ceviche. Chef Ricardo blends his with the seafood. It’s a little tart and I found I loved the sea urchin the best.

I can’t pass up mussels any time I see them on a menu and had these babies to myself. Like a lot of dishes, these mussels were cooked with aji amarillo and pancetta. I also adored the chicharron de pollo (fried chicken!) I had a few days later. Here’s a pic. Also, the jalea mixta is a fried seafood lover’s delight. Here’s the pretty pic. I really can’t wait for the next LA Street Food Fest this Saturday where Chef Ricardo will be handing out his delicious food.

I loved the sea bass tiradito at Cebiche night but we went with the tuna this time. I liked it but I have a sneaking suspicion I would have liked the sea bass based on server Molly’s reaction when ordered the tuna.

We decided to get the black cod and tomatoes & burrata from the anticuchos section. Loved both! Perhaps burrata isn’t very Peruvian but this is why it’s so fun. The food is excellent. Anticuchos remind me of a Japanese robata style cooking which I think they were going for. The salmon and chicken anticuchos were great as well (again, pics from another day). 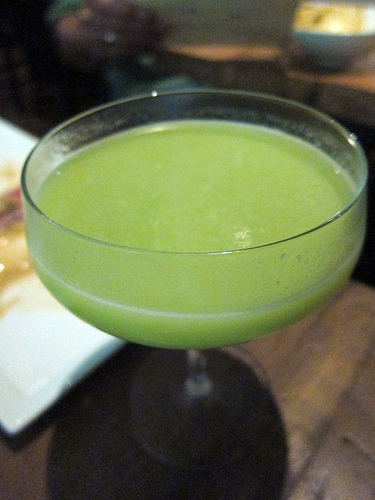 For my second drink, I ordered the Avocado Project (5 Island white rum, fresh avocado, lime, agave). Don’t worry, it’s not like drinking guacamole. It’s lighter and a just touch sweet. If you think avos shouldn’t be sweet, let me tell you about people that drink avocado shakes and eat avocado with condensed milk!

I loved the chicharron de costillas from the Cebiche night but this time, the pork ribs were served with crostini. Ah, I think I rather have had it as big ol’ hunks of meat. 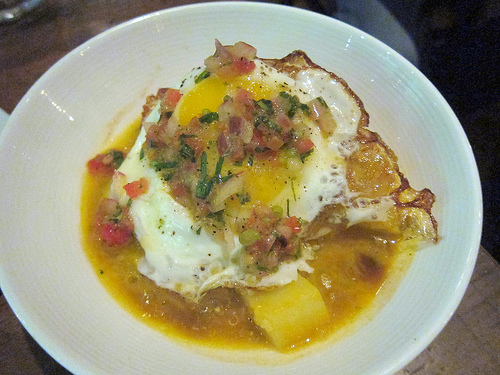 To round out our meal, we went with locro de quinoa and arroz chaufa de mariscos. It’s so funny to me that I eat quinoa all the time but hardly think of it as a Peruvian staple. In this dish, the quinoa is served with a Japanese pumpkin stew, choclo (like giant corn), Parmasean cheese and tomatoes. My friend loved this dish while I was in love with the fried rice.

Peru has a sizable Asian population and I learned years ago they make a mean fried rice.  Picca’s version was chock full of tender shrimp and mussels.

Shall we look at dessert?

I was hopping for more purple corn donuts but they were only offering churros, cheese cake, lemon tart and tres leches cake. We went with the churros which were surprisingly fantastic. The best churros I’ve had in a while. Loved the cream in the churros. It reminded me of an Anglaise-creme fraiche hybrid.

So the next time someone asks where would I like to go to dinner, I’ll answer, “Picca, please!”