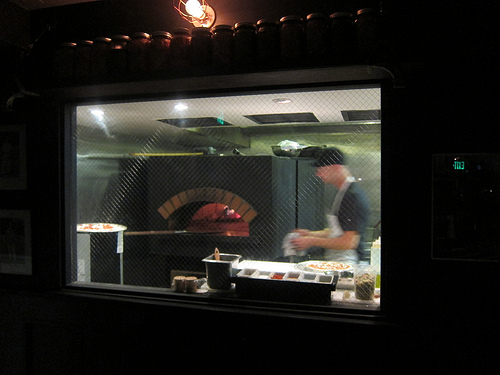 pizza oven at The Churchill

The Churchill is now open on West Third. The anticipated opening had been late summer but like most new restaurant openings, it had been delayed.  I was invited a couple of weeks ago to check out the two-story restaurant complete with a pizza oven and large photo booth. Those familiar with the Hudson would be pleased to know it’s a similar aesthetic at The Churchill. The sporty Americana prints adorning the walls were searched out at vintage shops from around the country.

The menu is farmers’ market driven and it’s anticipated to change to reflect what is available. The Churchill also follows the trend of craft cocktails with beverage director John Rankin leading the charge.

John had chosen wines to pair with our multi-course feast but brought us a taste of the Clementine (chamomile-infused Bulliet rye, Dolin bianco vermouth, lemon, honey,  Regan’s orange bitters). Ooh, it was exactly what I wanted. 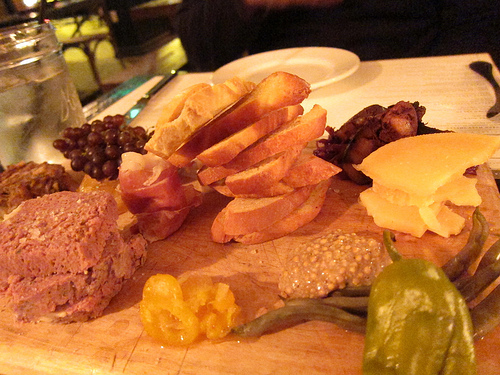 Executive Chef Spencer Johnston produces house-made charcuterie and presents it with artisinal cheeses. I particularly liked the chunky pate made from head meats. Everyone raved about the cheeses and I admired the jars lined above the window in front of the pizza oven. They contained the house-made pickles.

We enjoyed the oysters immensely and then moved onto a couple of pizzas. Being an artichoke fan, I preferred the veggie over the meat this time. Although the artichokes were supposed to be marinated, I thought they were closer to raw giving the pizza a nice crunch in additional to fresh arugula. I loved the addition of pistachios to the artichoke pizza. An unusual and fun combination. The proscuitto is very tasty though. Other pizzas like the sausage three cheese or the wild mushroom would also be fun to share.

There was something extraordinarily addicting about this salad. I suspect the pancetta. The finely chopped romaine and treviso salad also had olives, heirloom tomatoes, fresh mozzarella and the aforementioned pancetta.

Yay, more seafood arrived in the form of succulent baby octopus. I was recently asked if I preferred squid rings or octopus tentacles. Tentacles all the way!

The scallops were on a bed of greens and a sauce that was reminiscent of something I’ve had from Chef Ludo. It was quite pungent and familiar. It was the romaine-sorrel sauce and I suspect the herb sorrel played a big part in highlighting the salty sea theme. 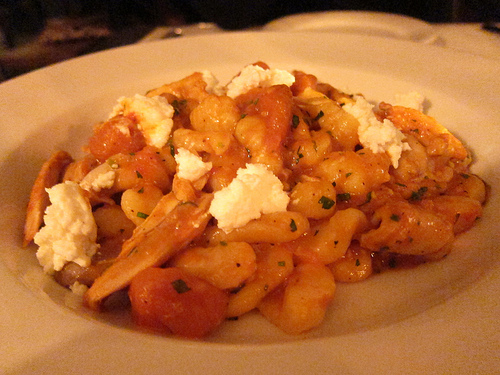 Another favorite of the table was the pasta. I believe the potato gnocchi is normally served with braised rabbit but I was glad to see no bunny on this dish. I tend to think rabbit is a bit bitter so I’m glad I didn’t taste any.

Our whole roasted rock fish was grand. I have never had a problem eating from shells and bones. I like to see my meat whole and know it comes from one source. I have been trying to wean myself away from mystery meats (stay away from me, McRib) and most importantly ground meat. The idea of hiding what meat is is strange to me. That’s why I am glad the Churchill is committed to a farmers’ market driven menu. Eat what’s fresh, what’s healthy and what’s good for you.

Loved the broccolini with the roast Jidori chicken.  I’d like to come back to try the Niman Ranch ribeye next time. 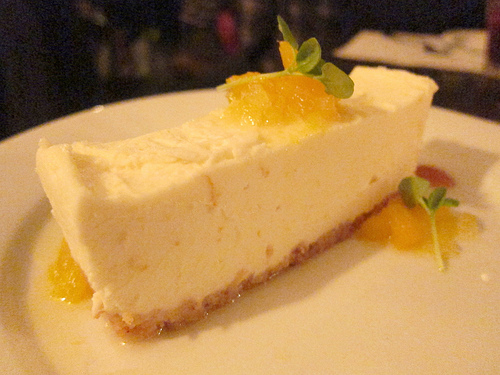 After a palate cleanser, we enjoyed two desserts. The apple donuts were stuffed with pieces of apple and I thought the presentation was very fun with three differently sized donuts. The lavender and citrus cheesecake was quite unusual. I’m glad it wasn’t covered in sauce so you can taste the subtle nuances of flavor.

Plus, they have a photo booth! Bonus!

I recall when this space was a tapas restaurant named Cava. For the last years, it has spent time as an Italian restaurant. I think West Third really needed something casual yet trendy like the Churchill. A place where you can lounge upstairs, on the patio, grab brunch, lunch or just some pizza with pals.