The cocktail scene has changed significantly in the last year in Las Vegas. Last year, I went to Downtown Cocktail Room knowing it was one of the few good craft cocktail bars in Vegas. Recently The Lady Silvia and Vanguard Lounge has joined the cocktailian ranks.

I’ve been following Las Vegas bartender Nathan Greene on twitter . He works at Vanguard. Still, I didn’t put two and two together until I got there. I just sort of assumed the Vanguard was like the LA club. Not so, it’s a cool bar on Fremont in Downtown Vegas. If I lived in Vegas, I’d go here. In fact, you’ll find many Vegas locals here.

After looking over the cocktail list, I opted for the Dust Cutter (Don Q Cristal rum, Manchu pisco, Plymouth gin, orange, lemon, oloroso sherry). It was exactly what I wanted- light, flavorful and easy drinkin’.

I didn’t try more cocktails at Vanguard because suddenly I had a Rocky Yeh creation in front of me. I technically met Rocky in LA a while back but he’s from Seattle and most recently we bonded in Portland for Portland Cocktail Week (so booze people travel around!). He and Tobin Ellis of Bar Magic (whom I met in Portland at said PDXCW but got to know in Vegas for his Social Mixology Repeal Day Party last December) decided to get behind the stick. Suddenly Nathan had friends to help him out.

Figuring it was a brown, bitters and stirred cocktail, I was in. And I was right. 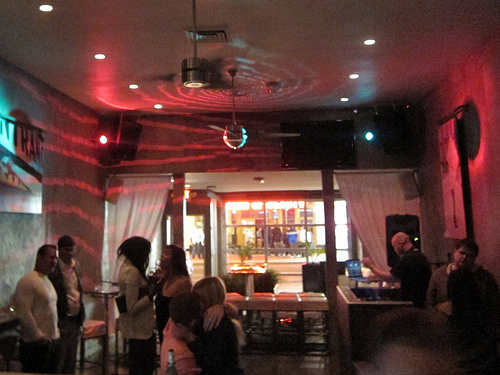 you never know when you find love

On this last trip to Vegas, I was mistaken for a local. Well, if I lived there, I know where I’d be.