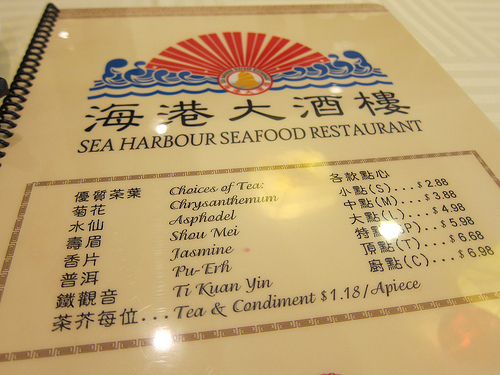 I celebrated Lunar New Year with dim sum at Sea Harbour, touted as one of the San Gabriel Valley’s finest Cantonese Seafood restaurants. It’s been a few years since I’ve been but I always remember the food fondly. 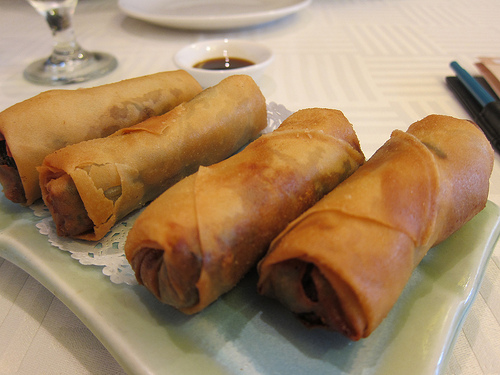 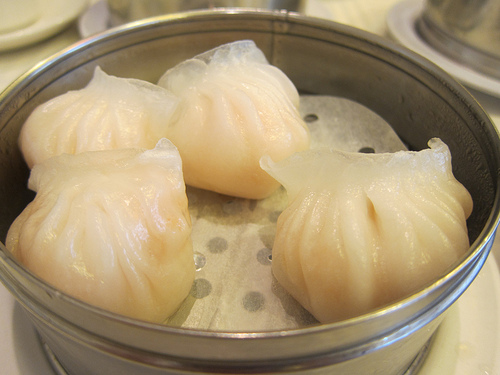 I’m going to have to let other people order because I usually end up with the same thing at dim sum joints you tick off what you want from an order sheet. Of course we had to get the standard har gow (crystal shrimp) and siu mai (pork and shrimp) dumplings. I found it neat they gave four egg rolls to an order.

interior of the egg roll

I have to say though these egg rolls were different because of the long leeks. The dumplings were good, fairly standard. 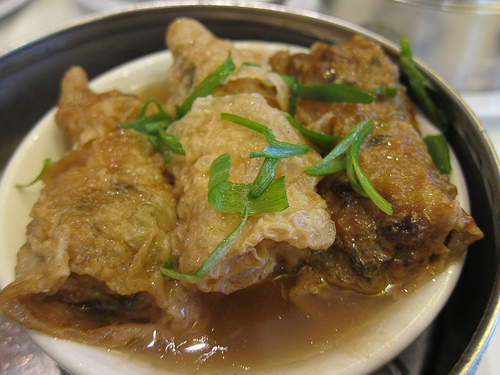 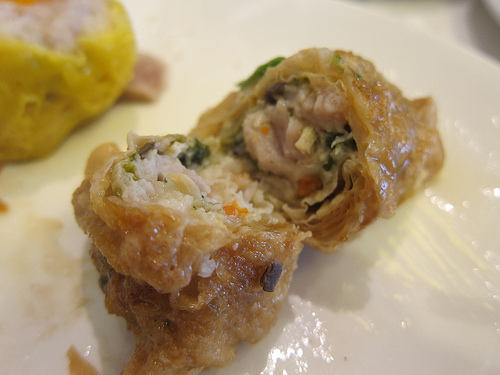 Like the egg rolls, the bean curd wrapped veggies roll had some quality ingredients not normally found in such a roll. I also noticed the food I had seemed to be lacking in the usual greasy/salty flavor in some dim sum. Could it be? No MSG? 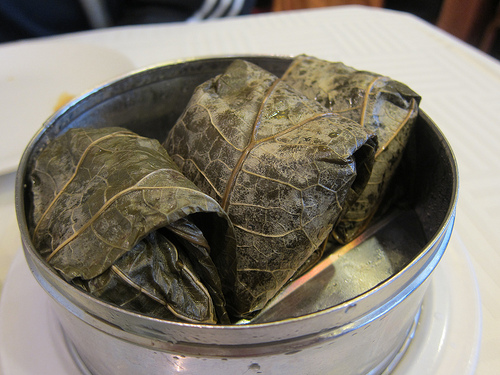 It occurred to me that I’ve never really shown the rice inside the neat lotus leaf wrapped rice packages (loh mi gai). Filled with sticky rice, pork and egg yolk, these savory packets would be great for a simple lunch. In dim sum, I try to avoid them to the end because I don’t want to fill up on too many carbs. Still, you can rarely control the flow of the food even when you order a la carte. When the food comes piping hot, eat it! 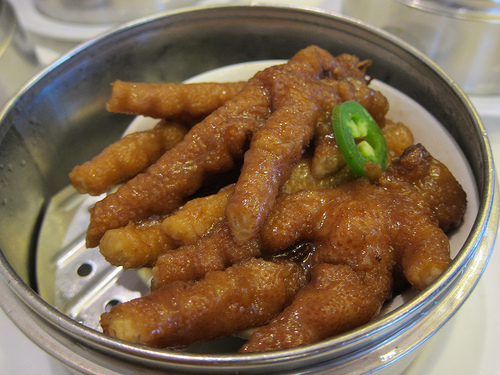 I was delighted by the plumpness of the chicken feet but could have used more of a spicy flavor. The rice paper wrapped shrimp (cheung fun) were amazingly not “trendy.” I expected some gourmet touch with asparagus but these were traditional.

It was probably at this junction I realized I ordered way too much food for two people. We took boxes and boxes home.

I liked the spare ribs and the shrimp and scallops dumplings. We waited forever for the veggie dumplings or at least they tasted like veggie. I am not sure why I would have ordered the veggie ones.

My ultimate favorite dumplings were the shrimp and leek ones. They were plump and juicy. The chiu chow fun gor are usually my favorite and these were pretty good though I have had better versions recently. I would have liked more celery in them.

I noticed a tendency of higher end dim sum houses cutting their radish (and taro) cakes in tall, big chunks rather than more flat rectangular ones. Either way, still good though you do lose some of the sear when they’re blocky.

I used to think Sea Harbour was my favorite over Elite and now I just don’t know. I’ll have to go on a side-by-side dim sum crawl or something to crown the ultimate dim sum house in the SGV.

Other dim sum houses in the SGV/ LA