As I prepared for my trip to Austin, I made a list of BBQ places I wanted to go to. I wasn’t going to have a car so going 20 or 30 miles away didn’t seem like an option. Everyone and I mean everyone will tell you to go to Salt Lick in Driftwood but luckily for me, they have a location at the airport. Yes, I know airport food isn’t the most exciting but Salt Lick at the airport was pretty good. I can only imagine the actual location would be better. Next time and there will be a next time for I really liked Austin.

In the meantime, I had a few different options for Austin proper. I decided to go to Lambert’s Downtown Barbeque when I realized I missed the window to go to Franklin’s BBQ. Apparently at Franklin’s, it’s best to get there an hour before they open because they tend to run out. Often by 1 PM. Well, that was no good considering the late nights I’ve been keeping. Lambert’s is considered “nice.” Just off Congress along Second Street, the restaurant was on the more upscale side. 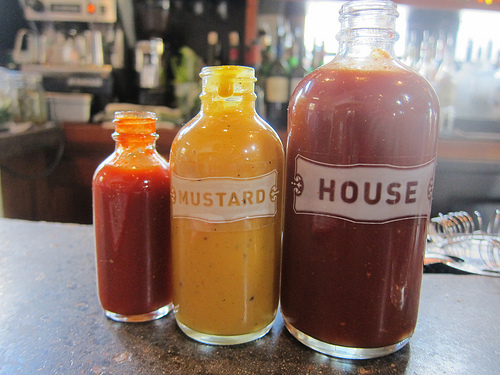 I sat at the empty bar for lunch and was soon joined by a few other single diners. We were intent on ordering BBQ. I decided that going for the 3 meats combo was the best option and it was only $16 for the three meats. I opted for ribs, brisket and a house-made jalepeno hot link. A trio of sauces was given to me. None were really spicy and I tried all of them with the different meats. I liked the small bottle that was more on the vinegar-y side for most things. The mustard went great with the hot link and the larger jar was of course perfect with the maple and coriander crusted pork ribs.

As I sat there, a man from North Carolina exclaimed it was the best brisket he’s ever had. While it wasn’t my personal favorite, I could see how he liked the brown sugar and coffee rubbed brisket. Later, I would talk to many people from Austin who moved here from other BBQ capitals who very nicely said Texas BBQ was “pretty good” but just not the same as “home.” Well now, I guess I have to head over to North Carolina and Kansas City.

Before my flight home, I spotted the famed Salt Lick stand and knew I had to try their famous BBQ. I got the two BBQ meats option which came with a big scoop of potato salad on top of a thin bed of cole slaw, beans and bread. You don’t get a choice of sauce and they give you a hell of a lot much to my dismay as I am a minimalist when it comes to sauce. They were rather snappy with me when I asked for a pickle (none available, apparently). Ah yes, I am in an airport.

Still, the brisket was much more tender than Lambert’s as well as the sausage. While I appreciated the tender brisket, I wasn’t into the soft sausage. I like a bit of a snap to the skin so perhaps I’d get a pulled pork sandwich next time.

If you’re in town for SXSW and can’t make it out to Driftwood, I do recommend Lambert’s (and grabbing some to go from Salt Lick at the airport).