One day, I tried them for lunch settling on the sashimi platter which came with bits of delightful fish and a few good pieces of sashimi. I went back for dinner and the sashimi plate was $10 more but so worth it with thick slices of fish. For $25, I got salmon, yellowtail, red snapper, tuna, octopus and clams. It was quite the deal. 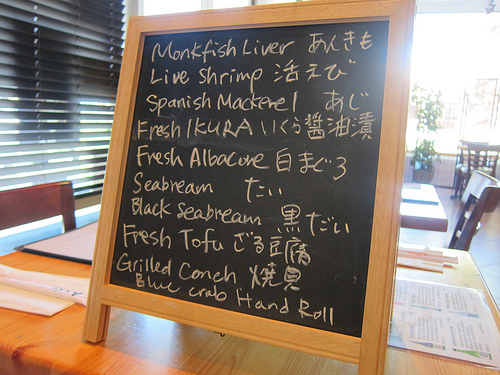 We looked at the specials board and our server told us the ikura (salmon roe) was particularly good that day.

But before I get too carried away, we did have shishito peppers and tempura to start.

The shishito peppers were mildly flavored and the tempura was non-greasy. Both were good but I think I rather have more sushi or sashimi.

As anticipated, the ikura was really good. Our pieces disappeared quickly.

Although I struggled to finish my plate of sashimi, I couldn’t resist the lure of a blue crab hand roll. Sushi Ichi does theirs with a bit of shiso leaf giving it a slightly minty flavor. There’s also crunchy bits in there that reminds me of soft-shell crab.

For lunch or dinner, Sushi Ichi was authentic and a good value. Good thing I don’t have to drive another ten minutes (or depending on traffic, 30 minutes) to Little Tokyo.

** Note: make reservations to sit at the sushi bar