Food festival season is upon us!

The big one in a couple of weeks is Los Angeles Food and Wine taking over the streets of Downtown Los Angeles. Beginning Thursday, August 25, LAFW kicks off with Eat the World with Emeril Lagasse. Then there are several lunches around town on Friday, August 26. My picks would be at Otium with Timothy Hollingsworth, Jon Shook and Jeremy Fox or Stephanie Izard at Scopa Italian Roots with Chef Antonia Lofaso. Later that evening, Night Market hosted by Jet Tila and Brian Malarky takes over Grand Avenue. Night Market is always a favorite evening.

Have you got the stamina for three more big tastings? Check out the Lexus Grand Tasting on both Saturday, August 27 and 28 during the day. Saturday and Sunday’s Grand Tasting will be in Santa Monica this year. There are different chefs each day so you have to do both! Then on Saturday evening, Live on Grand with host Tyler Florence features a performance from De La Soul.

Check out all the beautiful bites from last year’s LAFW here. And get your tickets here. 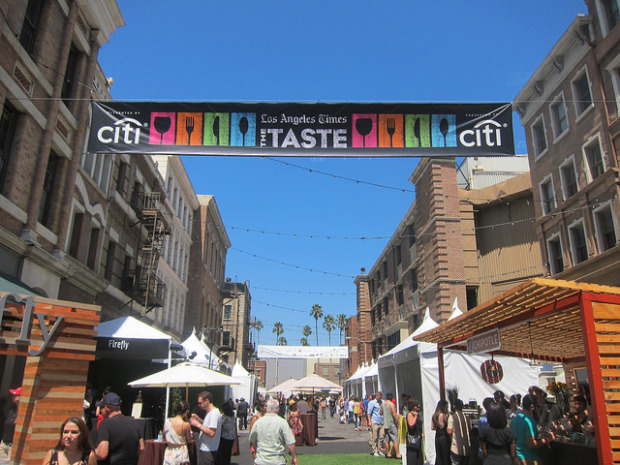 Over Labor Day weekend, Los Angeles Times’ The Taste returns to the Paramount Pictures Studios. The multi-day festival starts on Friday, September 2. The opening night features all the LA Times food big wigs including everyone’s favorite critic. Then it’s time to do it all over again as chef Michael Cimarusti travels down the street to the studios to host the daytime Saturday event called Field to Fork on Saturday, September 3. Stick around that evening for Dinner with a Twist with Co-hosts Chef Ray Garcia and Beverage Director Michael Lay from Broken Spanish. Sunday, September 4 sees a good old fashioned Block Party with co-host Mary Sue Milliken from Border Grill during the day and rolls into Flavors of LA at night. Chef Kris Yenbamroong from Night + Market will co-host the fun night.

Sadly, I was out of town last year so enjoy these pics from 2014.

Dinner with a Twist.

Buy tickets to all the events during The Taste.

One of my favorite food fests is LA Loves Alex’s Lemonade which helps in the fight against childhood cancer. On Saturday, September 10, dozens and dozens of chefs from around the nation will serve food on one delicious afternoon. Hosted by local chefs Suzanne Goin and David Lentz, they welcome an incredible line up that includes Adam Perry Lang, Michael Voltaggio, Chris Bianco, Jonathan Waxman, Marc Vetri and more. Some new chefs participating this year include Aaron Sanchez, Dominique Crenn, Walter Manzke, Ori Menasche and more.

I am really looking forward to food from local favorites like David Lefevre, Josef Centeno, Susan Feniger, Bruce Kalman, Bryan Ng and also seeing chefs who are coming in for this event. I’ve had great food from Jenn Louis from Lincoln in Portland, Oregon and Cosmo Goss from The Publican in Chicago. I’m really interested in the chefs from Seattle, San Francisco, New York, New Orleans, Miami and Derek Dammann is coming from Montreal!

I love that in the past five years since its inception in LA, more than $3.2 million dollars have been raised for the Alex’s Lemonade Stand Foundation. It’s a wildly successful event seeing over 2000 attendees last year. And you might spot a celebrity or two as Hollywood has been very supportive of this event. One year I saw Neil Patrick Harris while you can count on Jimmy Kimmel to attend yearly.

Sadly I wasn’t able to attend last year as I was out of town so check out the bites I still dream about from 2014. That year was the first year Alex’s Lemonade was at UCLA. I really enjoyed the layout of the Quad and it made getting around to all the booths very easy.

Other notable events coming up: