I’m starting a new Spirits Week on The Minty with another post for my Amaro Handbook. Italians have been producing amaro, liqueurs that were originally intended as medicine, for centuries. As previously explained, most likely the concept of amaro came from French monks who had secretive elixir recipes. The Italians however developed secular recipes that were specific to families and the communities they lived in.

I’ve been exploring various amari and I’m proud to present the next installment: Fernet. I had started with aperitivo and now I’m moving on to the digestivo starting with probably the most famous subcategory, Fernet.

The most popular is Fernet-Branca. Last year I attended an event led by Edoardo Branca, sixth generation of the family. He was promoting Branca: A Spirited Italian Icon, a beautiful coffee table book.

We tasted three versions of Fernet-Branca; 70s, 80s and the current version of the digestivo. Edoardo is one of the few in the family that knows the complete recipe which has changed slightly through the decades. He mentioned there’s saffron which I knew about but galangal was a surprise. Then there’s aloe, chamomile, rhubarb and of course, mint. People joke I like Branca because it’s so minty. It’s true!

Years ago when I was on a mission to taste every fernet out there, I came across Amaro di S. Maria al Monte a bartender had recommended. Using Branca as my baseline, this one is less minty and a little sweeter. This is a good one if you don’t like things too bitter.

Branca was actually not the first fernet. I have heard Luxardo produced the first one from an amari seminar I attended years ago in Boston. Though recently I was introduced to Fernet Vittone and they claim to be the first one.

Vittone is much more bitter and I was lucky enough to try a vintage one as well as the current production.

Recently Geijer Spirits have been making the rounds in Los Angeles with their glogg liqueur as well as aquavit, orange liqueur and now their fernet.

The California Fernet has an almost grassy quality. It’s brighter, with orange notes, and feels like you could almost have it as an aperitif rather than digestif. I’d like to try this in a drink. Perhaps my fave way to have a Last Word where I sub out the gin for fernet. 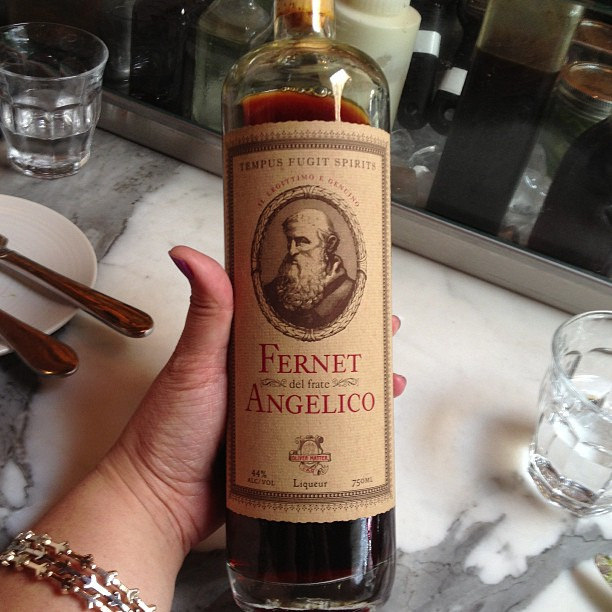 Tempus Fugit has Fernet Angelico (Fernet del Frante Angelico), the closest fernet I’ve tasted to Branca. While some might find that silly (why would you want to copy the classic), some might just enjoy it because the recipe is so similar. Note the current name of this product is Fernet del Frate. I assume there was a legal reason to change Angelico which could be confusing (Frangelico?) as Tempus Fugit once had to change their Kina L’Ero D’oro due to threat of legal proceedings.

While I was in Seattle one year, I tasted a local (well, if Portland, Oregon is local to Seattle) fernet from Townshend’s. They called it the Pacific Northwest Fernet. It’s distilled with tea.

The “Mexican Fernet” is what Fernet-Vallet is known as it’s produced in you guessed it, Mexico. This one has almost a syrupy cola quality to it. It’s not at all bitter to me.

While I was in Chile earlier this year, I came across the Martini and Rossi fernet. I have never seen this in the US. I tried it along with a local bitter, Araucano which was extremely bitter. In comparison, I much preferred the Martini and Rossi one. I also spotted the Ramazzotti Fernet in Chile but I didn’t get to taste that one. By the way, the Chileans laughed at me and stuck with their pisco.

Remember that Pacific Northwest fernet? I found another amaro distilled with tea, the Amaro Bilaro. This one is from Sonoma County, California. I found it extremely bitter so I categorized it as a fernet though I supposed you could put it in the medium category.

I also categorized the Nardini amaro as a fernet because of the bitterness. But like the Bilaro, perhaps others might throw it in the medium amaro category.

I recently tried the Cannella Fernet. It’s another fernet made in San Francisco. They are truly crazy about the stuff. I personally didn’t love this recipe. It was very imbalanced to me and perhaps needed some sweetness.

I spotted this fernet from Rapa Giovanni recently. I found this a bit thin on the palate and not quite bitter enough for a digestivo. Still, I liked it over all.

Overall, I’ll always be a fernet-head while people shudder at its bitterness. I find it bracing and refreshing. I also think it’s a great shot after a huge meal like Korean BBQ in LA.