I was in Seattle in early March for a long weekend. I was able to pack in a lot of sight seeing but of course had time to have a meal or two.

On my first night, my friends took me to their neighborhood bar for trivia night. Norm’s is a doggie bar. Meaning people can bring their dogs to the bar. Now, in L.A., dogs are not allowed unless they are service animals. I felt like the little girl in Animaniacs. I wanted to pet and talk to every one of those cute doggies. Norm, by the way, is the name of the owner’s dog. He’s planning on expanding and naming the second bar after his other dog. 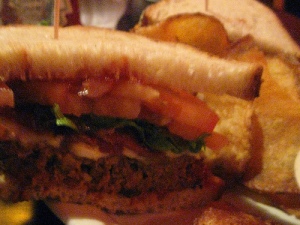 The next day was a frenzy of tourism. I was at the Space Needle, Experience Music Project, Sci-Fi Museum, Pacific Science Center, Pike Place, Seattle Art Museum, the Waterfront and then a wild girls night out. 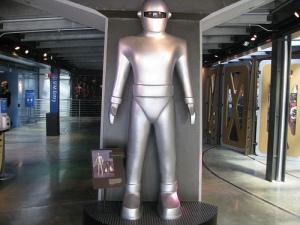 I was walking around the Space Needle enjoying the view and wondering why I wanted a hot dog so badly. Apparently they sell ’em at the Space Needle cafe. I of course, also had to get a bag of my favorite kettle chips in the world, Tim’s Chips which are made in Washington.

While walking around Pike Place, I thought I’d satisfy my wonton craving at Saigon Restaurant. Sure, I didn’t think it would be fabulous but I had hopes. It was fine but I was ready for what else the Market had to offer.

I stumbled upon Pike Place Chowder where I couldn’t decide on which chowder to get so I got the 4-cup sampler. I opted for clam, seared scallop, seafood and chicken & corn. All were fab but I liked the clam the best. Every one of them was so rich and creamy. 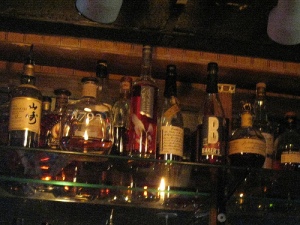 What’s a great meal without a beverage to enjoy? I asked the bartender at Ozzie’s what was his favorite bourbon and he poured me a glass of Blanton’s single barrel which I had been curious about for a while. I love the round bottle and silver horse on top.

The next morning, I was off to wine tasting in Woodinville but not before consuming 1/8th of this enormous chicken fried steak at 5 Point Cafe. It was the best chicken fried steak I’ve had. Up until this point, I thought the best was somewhere in Arizona. But 5 Point’s sausage gravy was the selling point.

Be prepared for a wait for the food though. Things this good take a while.

← It Ain’t No Chicken Scratching: The Foundry
Seattle Winery Tour →