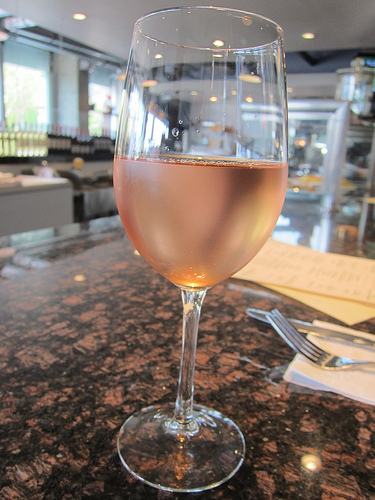 Culver City is rapidly becoming a place I’d like to live with a downtown full of great restaurants. I was invited to happy hour at the newish L’Epicerie. I remembered when it opened in December of last year and back how exciting it was to have a gourmet market that also serves food all day. Tables are mixed in with the imported goods, wine shop, coffee counter and the center bar is a great spot for happy hour. 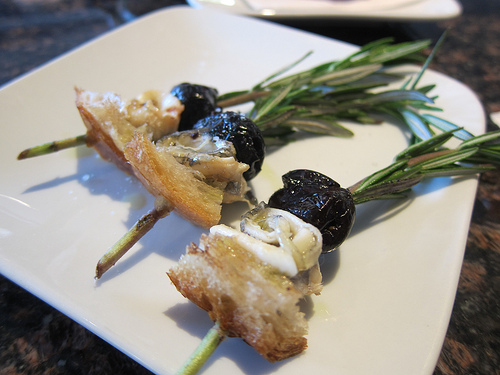 We started off with glasses of rose wine (how is it only $3 a glass?!) and some marinated anchovies and pickled vegetables. I really liked the pickled veg in champagne vinegar. The anchovies were fun skewered on rosemary sprigs.

I eyed some of the apertifs such as Monaco (Spaten beer with French limonade and grenadine) or perhaps something more bubbly like a Kir Royale. Apertifs are $8 a glass. 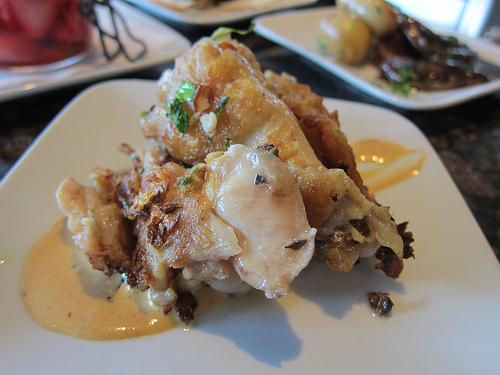 L’Epicerie is owned by Thierry Perez who brought on Chef Sebastien Archambault as a partner in late March. The menu is a mixture of Southwestern French fare and seemingly Spanish though later, I would come to understand it’s really a bit more Basque, with French and Spanish influence. The tortillas de patatas surprised me. The one bite I had was so deeply flavorful. I wanted more but more small plates started arriving.

I love confit dishes and the chicken wing confit was great. The chicken was very tender and the bones didn’t bother me. This is stylish bar food.

The beef tongue wasn’t part of the $3 happy hour menu but at $5, it would be silly to pass up. The tongue was quite tender and even the little potatoes were good.

Yummy foie gras. What am I going to do when California bans it next year? Until then, I’m getting as much as possible. The foie for only $8  at L’Epicerie was especially rich and creamy. 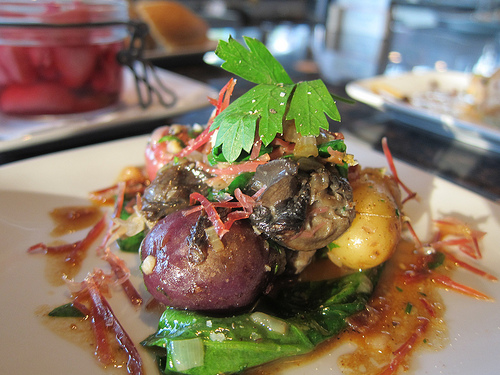 The chef sent out a couple of dishes for us including the escargot and the shrimp. It was emphasized the escargot is not the usual garlic sauce but more of a rustic white wine sauce. I liked it just as much. The shrimp were very fresh and the chorizo gave it a great flavor. The red pepper sprinkled on top was a simple but powerful flavor enhancer.

I lost the battle of no dessert this evening. Rum baba? Yabba dadda doo! Yes, do it. The rum-soaked balls of sweetness reminded me of an Indian dessert, gulub jamun.

I can’t wait to go back for lunch. I’m also thinking this would be a cute place to pick up picnic essentials before hopping over to the Hollywood Bowl.

Tomorrow, L’Epicerie is celebrating Bastille Day with French cocktails and small plates for $4 all day. You know what that means? All day happy hour! Who says you can’t have your cake and eat it too? Rum baba for everyone!

One thought on “Culver City: Happy Hour at L’Epicerie”