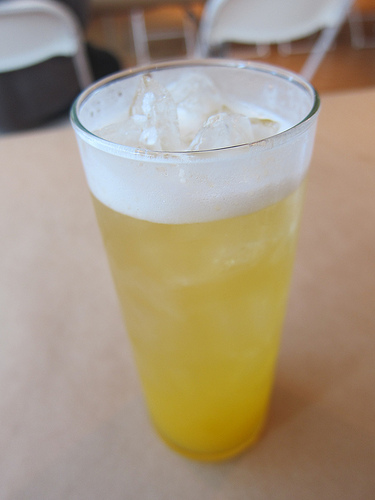 Day 3 of Portland Cocktail Week started off with punch in the courtyard of the Jupiter served up by birthday boy Seattle bartender Rocky Yeh. We had toasted him at midnight the night before at the DonQ Yacht Rock party but it doesn’t hurt to keep celebrating. I carried my punch into my first seminar of the day, Beer Cocktails with Jacob Grier and Ryan Conklin. Read all about it on LA Cocktails here.

I happened upon the Lost Art of Technical Free Pouring  and enjoyed watching Tobin Ellis give pointers on free pouring in the courtyard before heading off to the Bon Vivants’ Triple Buck. I had intended to stay for lunch then head over to the Great American Distillers Festival.

Triple Buck with the Bon Vivants

After some ribs and a few Wild Bucks (bourbon, smoked fig marmalade, lime, grated hazelnut, ginger beer, fig & thyme garnish) from Bar Lab, I decided to stay at Davis Street Tavern and just have a good time. Read about the magnificent 5 hours spent there here on LA Cocktails.

It’s a good thing the GADF was 2 days so I was able to hit it up the next day.

I ran back to the hotel to change and stopped into the happy hour sponsored by 42 Below at Doug Fir. They had chair massages and readings in the lounge. The psychic told me that all my hard work was going to pan out but no Mr. Minty on the horizon.

Being from LA,  I’m spoiled for choices for mezcal. Del Maguey has established themselves as a very good brand that most bartenders from around the country knew about. I woke up that morning to find an invitation to their burgers party later that evening.  Mezcal enthusiast and Boston bartender Misty Kalkofen was serving up several cocktails. I first tried the Benificio del Cafe (Del Maguey vida, Averna, Benedictine, simple, Jerry Thomas decanter bitters, grated coffee garnish). Woohoo, loved it! Next I had the punch (Del Maguey vida, R&W Apricot, lemon, canela, black tea). I decided to skip the Gail Collins in favor of jamming over to the Robots vs Humans party conveniently a few steps away.

Misty was such a professional. When I tried to be Eco-conscious and reuse my plastic cup, she said she really couldn’t have the flavors of the Benificio muddle with the punch. 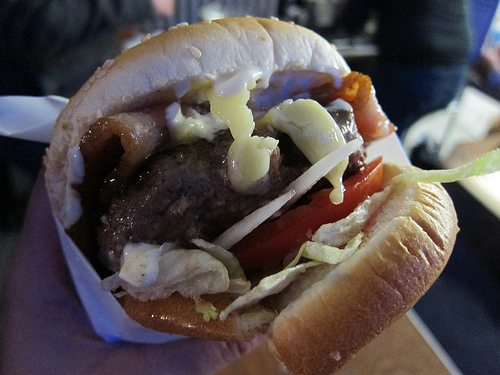 Del Maguey brought in a local food truck to feed us either American, Mexican or Italian burgers or samburgesas. My American was quite yummy. 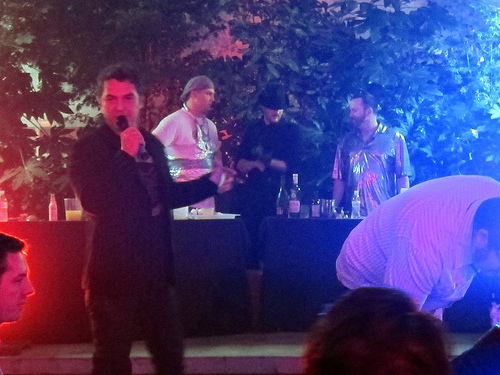 The boys cleaned up well after the exciting Bon Vivant’s Triple Buck. Three human bartenders were going to compete as well as the robot Chassis. Read about the winner and competition here on LA Cocktails. 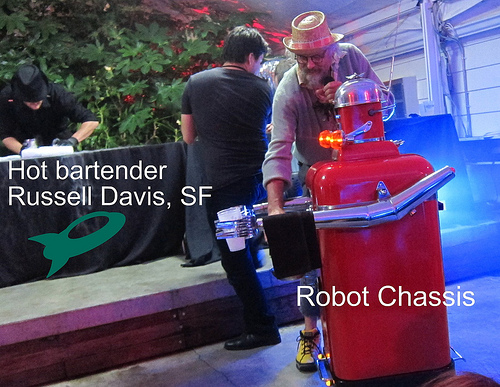 Although the after party wasn’t too far away at Rum Club, I decided to call it a night. The next day would be the last day of Portland Cocktail Week and I was determined to get to the Great American Distillers Festival.

One thought on “Day 3 of Portland Cocktail Week”