People  might be surprised to learn I like to eat on average 7-9 servings of vegetables and fruits a day. I love veggies. Although not enough to become a  vegetarian. I do try to eat at least one vegetarian meal a day. While at the Grove the other night, I stopped by the Veggie Grill  at the Farmers Market for a quick meal before catching a flick. I had tweeted and everyone gave me their faves ranging from the Buffalo chickin’ wings to the All Hail Kale. 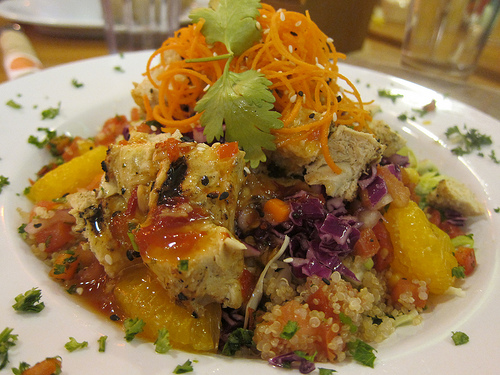 I had decided to get the Thai Chickin’ Salad and a side of kale. Of course I should have known something was up when I got charged $20 and realized the clerk gave me the All Hail Kale salad, a full sized salad versus the steamed kale side. All well, I believe I made a dent towards my 7-9 servings of veg this day!

I am not sure why I’m so obsessed with faux meats. I think they’re kind of funny. Not ha ha funny but mysterious to me because why would anyone who doesn’t eat meat would want to eat something that resembles (at least in name) to the actual product? I get into this a bit when I explored the vegan options at Breeze at the Hyatt  in Century City.

It turns out Veggie Grill’s faux chicken or as they charmingly spell it “chickin,” is actually quite good. The pieces are very soft and airy. I liked the Thai Chickin’ Salad quite a bit. As for the kale, I thought the ginger-papaya dressing was too sweet for me. I ended up taking about half of each salad home.

There are quite a few locations of this fast casual chain around town and even some in Oregon. I’ll have to explore the veggie-steak and tempeh options next time.

Veggie Grill at the Farmers Market/ The Grove