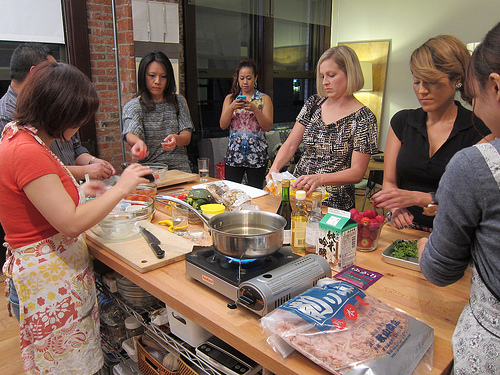 I was invited to a preview of Foodstory‘s Japanese Holiday Cooking class a couple of weeks ago. I was really excited because although I cook, I pretty shy about actually cooking for others. I hoped interacting with my fellow food writers would break me out of my shell.

I found myself at a Downtown Los Angeles loft with Foodstory’s founder Yoko Issei. We gathered around the center island and she handed out our tasks. After snapping a few photos, I volunteered to cut the fish and veggies. I had to decline the task of the chicken as I really hate cutting raw chicken. The squish! 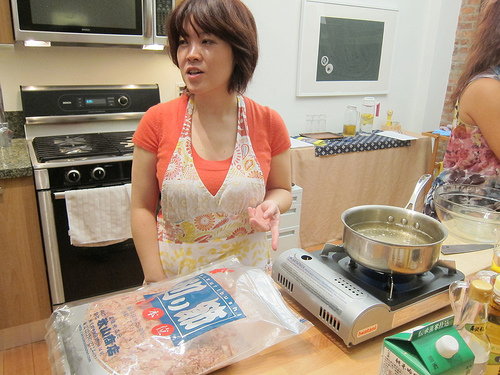 Oh my gosh, look at that huge bag of bonito! We made a dashi broth to marinate the cherry tomatoes. 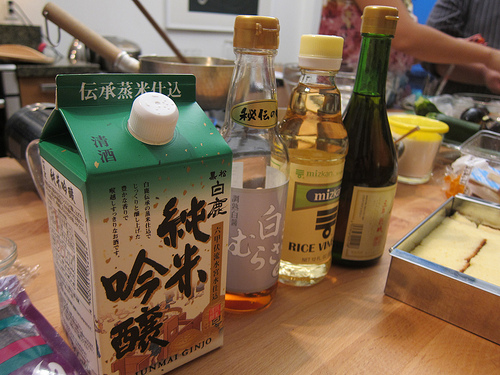 I am very interested when people tell me about their favorite products. I’ll have to look for the mirin Yoko recommended. She likes shopping at the Nijiya in Little Tokyo here in DTLA. 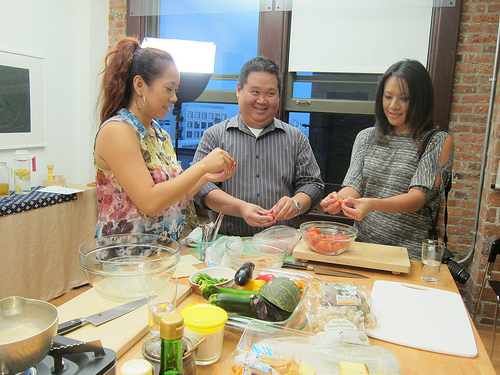 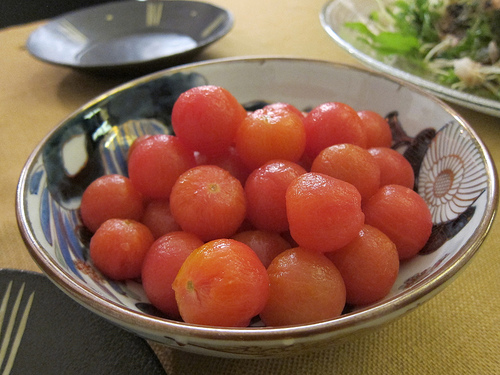 It’s worth the effort for the briny tomato treats.

Bonito and seaweed make an appearance in this daikon and greens salad. The daikon is shaved into thin strips and I enjoyed the dressing we made to go with it. You’ll have to attend Yoko’s cooking class to get the recipe but there is ground black sesame involved. And yes, you grind it yourself.

using a sushi knife for the first time

When Yoko revealed the sushi knife, I knew I wanted to cut the fish. I carefully took it out of its box and unwrapped it, testing the weight in my hands. It was so easy and smooth. I blinked and had a massive pile of cut salmon in front of me.

We weren’t making nigiri though. We were making temari, a type of sushi that’s round. First you make your sushi rice by fluffing it out with vinegar. Then we rolled a bit of rice into balls and topped it with your choice of topping. Yoko’s favorite is a preserved vegetable that makes a great vegan treat. Here’s a hint, making the balls with plastic wrap really is much easier (and less sticky!).

Here’s our beautiful temari. Is it time to eat yet?

It took me slightly longer to cut up the veggies than the fish but I’m glad I had help.

For dessert, we finished with a strawberry cake. This was super easy to do. I can imagine it with other fruit as well as the season moves steadily to Fall. How about pumpkin?

Foodstory would be fun for dates, company teambuilding, friends, showers, birthday parties and more. You can ask Yoko to create a custom menu for your private cooking class. But if you want to test the waters first, check out her public classes. The next two on November 17 and December 9 features some of the above dishes for her Japanese holiday cooking classes.

← Boston: Dining at 80 Thoreau in Concord
The Minty Checks Out Acura’s ILX #weekwithILX →