Chaya Downtown is running a few different special events. They’re kicking off their popular Summer Beer Garden on Tuesday, May 28 and having a celebration on Thursday, May 30 with live music performances from The Anthony Long Quartet and taiko drummers.

I was all over the place on my  last visit. I decided to get the kaiso salad from the regular menu, try one of the specials, order nibbles from the happy hour and beer garden menu as well as sample the rotating farmers market cocktail.

If you like seaweed as much as I do, you’ll be delighted by the kaiso salad. It’s a great blend of greens, seaweed, radish, juicy tomatoes and we loved the crispies from the soy ginger dressing.

The special that evening was quail with cherry, fresh almonds and peas. I never had fresh almonds before which were little bursts of liquid fun.

May’s almost over but you can catch this month’s farmers market cocktail which features Atlantico reserva rum, agave, citrus and coconut water.

From the izakaya menu, we tried the spicy shrimp dome which is a crispy rice cake topped with spicy shrimp. They also have a spicy tuna version. Our server confided it was one of their most popular items. 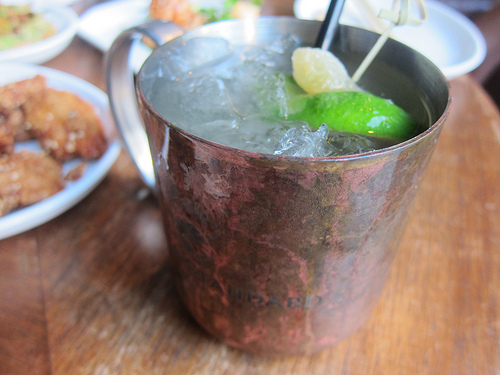 Chaya has gotten the craft cocktail bug and is serving their version of a Moscow Mule called Speak E-Z-T with Russian Standard platinum vodka, ginger beer, punished mint, lime, candied ginger. I’m not sure what the mint did to get punished but it went great with our food.

My other pick from the signature cocktails list would be the Frisky Whiskey (Maker’s Mark, Barenjager honey liqueur, orange juice, simple syrup, bitters, orange). At first I was worried by the mention of simple syrup when there was already a sweet modifier but it turned out to be a very balanced cocktail. 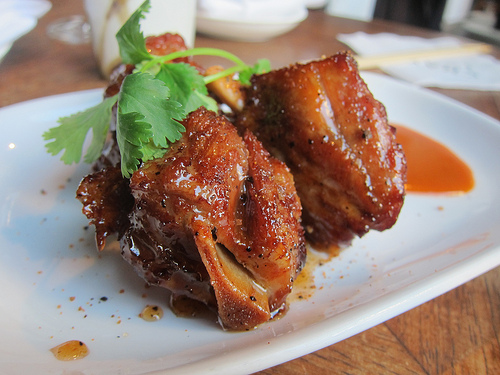 We were getting full but I had to try the baby pork shank which was great. It was just the right amount of food. 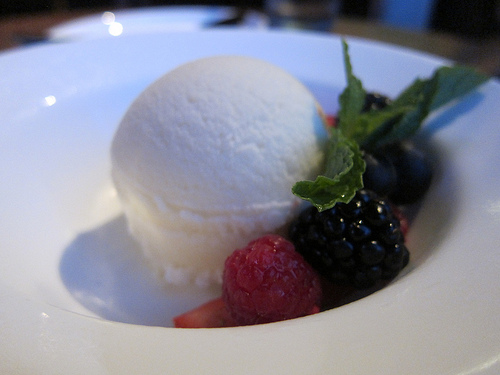 But then I heard about the pina colada sorbet. Ooh, had to have it! It wasn’t too sweet and was a perfect way to start a summer of relaxed dining and imbibing.

One thought on “Summer Beer Garden Returns to CHAYA DTLA”