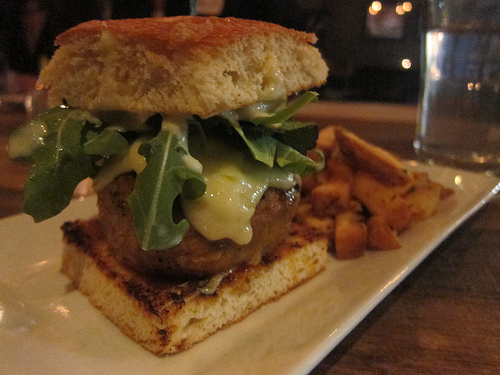 I dropped into Wood & Vine after the last LA Weekly web awards to drown my sorrows with a pork burger. I was up for Best Food Instagram along with The Fork Reporter and babes Lindy & Grundy. There were a few other nominees but I partied with these rock stars. The prize went to Evan Funke of Bucato, a newly opened Italian restaurant in Culver City. Time will tell if I will check out the no-photos/no cell phone policy restaurant. Food pornographers tend to get the shakes if no food pics are taken. And yes, damnit, we still enjoy the food with our technology.

In any case, I had one cocktail. I happen to love the musician Prince and zeroed in on the best named cocktail of the list; the Raspberry Beret which is also my favorite Prince song. The whiskey drink was pretty good though I’m probably more fond of the Wood & Vine’s Bee’s Knees. The other cute cocktail name award goes to Dora the Explorer (Azul tequila, cilantro-infused agave, lime, habanero tincture). 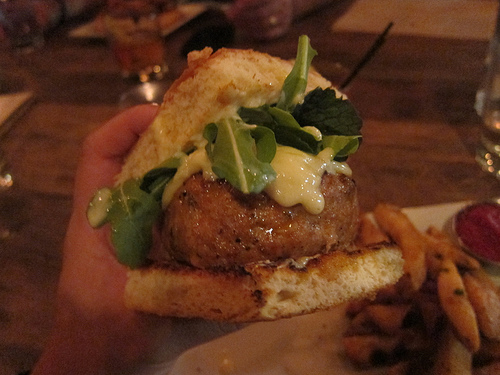 close up on pork burger

About this pork burger- my favorite pork burger is Wood Spoon‘s version with cabbage. However, Wood & Vine’s version gets points for being juicy and extremely well-cooked. I was surprised how dense the patty was but still moist. I probably could have done without the trendy square bun but that isn’t my battle to fight.

The next time I’m in Hollywood, I’d like to try the Hadouken S14 (Yamazaki 12 year whisky, old fashioned aromatic bitters, nutmeg, orange oil) or you might be able to catch the last of the summer menu. ‘Merica (Art in the Age Root liqueur, rye, Fernet Branca, vanilla bean foam) sounds like it should be a year-round drink.

For your clear booze lovin’ friends, the fizzy Accomplice sounds perfect, especially if the days continue to be in the 80s-90s.