Ebanos Crossing opened recently on the corner of Hill and Second Streets in Downtown Los Angeles. Named after the smuggling point Los Ebanos in Texas, the bar dips into Prohibition history and features the three spirits that were smuggled in including whiskey, rum and tequila. The menu is divided into three sections highlighting these spirits.

The cocktail list was created by Phil Ward of the famed tequila and mezcal bar Mayahuel in New York City. Phil trained under Julie Reiner at the Flatiron Lounge and later helped open Pegu Club with Audrey Saunders. He is probably best known for his work at Death & Co.

In LA, the bar is managed by head bartender Aaron Melendrez formerly of Neat.

I tried out a couple of cocktails aiming for whiskey first. Yesterday’s Noose caught my eye right away as it has whiskey, my favorite Green Chartreuse and intriguingly absinthe. I think absinthe is starting to show up in more and more cocktails as an accent. This was a lovely drink. 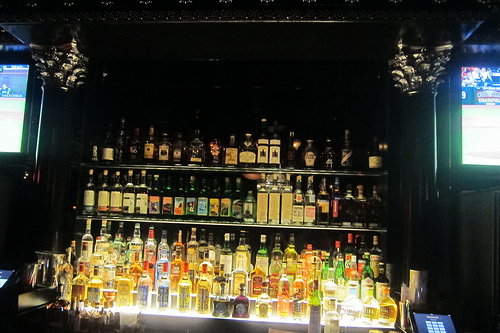 Initially the bar at Ebanos doesn’t seem to fit the large space but as you look closely, it’s well curated. Plus, they have a smaller bar that will serve as a R&D bar on some nights. Ebanos recently introduced A Living Room Affair with guest bartenders tending bar alongside their own talented team. Last week, Partida Tequila sponsored Edwin Cruz from The Spare Room and this week, Greenbar Collective is the sponsor. Ebanos’ bartender Gioconda St. George will be shaking it alongside a mystery guest bartender.

Next, I kept to the brown, bitter stirred theme and tried the Bear Flag Revolt. It is a very good cocktail but I wasn’t really in the mood yet for coffee. I should have tried this rye and mezcal mashup with Galliano Ristretto at the end of the night.

The First Battle of Tabasco

One of the popular cocktails is the First battle of Tabasco. Served over crushed ice, it’s an easy sipper. I have many, many more cocktails to try so I’ll have to return soon. Luckily Ebanos has happy hour. There’s a metro stop (Civic Center/Grand Park) very close by so this would be a great starting or end point for a DTLA bar crawl.

One thought on “DTLA: Cocktails at Ebanos Crossing”