Before I left for San Francisco, I asked a friend in SF for a short list of new restaurants I had to try. One of them was Coqueta.

I tried to make reservations but they were booked up so we took a chance at the bar. Luckily we found a couple of seats at the bar and I admired our view of the new Bay Bridge.

A friend was having dinner at Coqueta at the same time and called me over to admire the enormous board of pintxos they sent out to their table. Coqueta was kind enough to send some to my corner of the bar as well. I really enjoyed the quail egg pinxo.

Coqueta’s bar program is headed up by Joe Cleveland. He worked for Jose Andres for four years in DC and I could see a lot of that molecular mixology influence while he bustled around the bar. At Coqueta, it’s more understated and not really the focus of the program but there are quirks here and there. If anything, because Coqueta is a Spanish restaurant (owned by renowned Chef Michael Chiarello who is best known for Italian cuisine), there’s a heavy gin influence. I sampled various “gin and tonics,” almost like a flight. Some featured Joe’s housemade tonic waters and others replaced the familiar gin with daring spirits like mezcal. Is it then a gin and tonic? No, but it’s in the spirit. Actually, a lot of gin drinks take to tequila and other agave spirits quite nicely because of the vegetal flavors.

Coqueta was also kind enough to send out some croquettes which were lightly battered and fried. They were creamy and warming on this chilly evening. 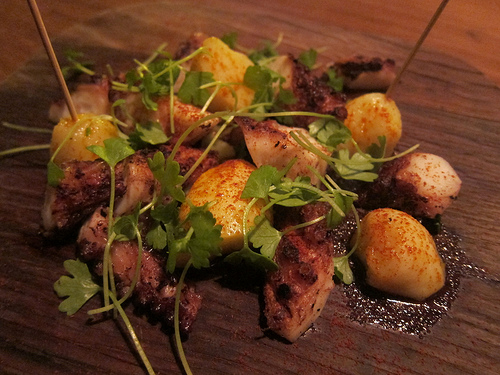 Although we were treating this as dinner, it was only our second meal of the day and we were “grazing.” We decided to go with a couple of dishes before moving on with our SF tour. I chose the wood-grilled octopus though I wondered about the whole Monterey squid. I liked the smooth, non-chewy texture of the octopus. We swiped our potatoes through the chorizo dressing of our other dish for additional flavor.

Once you move on from the Spanish gin and tonics section, there are sherry cocktails, modern cocktails, sangria, SF inspired cocktails and even party pitchers. The list may be changing soon as I got a sneak preview of the Basque Hotel (top photo) which is coming onto the menu soon. It’s a drink inspired by three different cocktails including a Pisco Sour. The Basque Hotel features juniper-infused Pisco Capurro and Joe’s housemade bitters. It’s a sweet and lovely cocktail hinting at the coming Spring.

I also tried the Spanish Golden Ale. Despite its name, it doesn’t have any beer in it but rather Old Tom gin, tonic and sherry. It seemed to be the crossroads of the various drink categories. I really enjoyed it since it’s very food friendly. 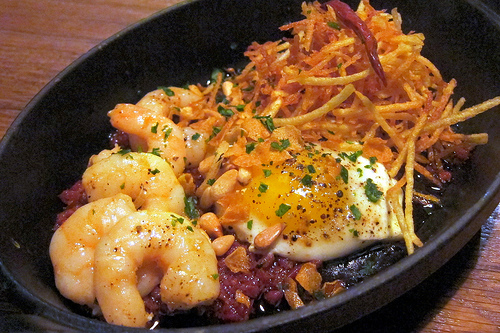 sunny side up egg with shrimp, crispy potato and chorizo dressing

Our favorite dish was the shrimp with sunny side up egg and crispy potato. The chorizo sauce was amazing. I’d put that on everything. I hope Coqueta jars it for sandwich spread. It’s that good.

Despite knowing we were heading off to more SF eating adventures, we got dessert. And I’m glad we did. The Manchego cheesecake pops were so good. Manchego isn’t my favorite cheese and I had doubts. But we really enjoyed this dish and the caramel popcorn was just fun.

I try to visit different places every time I travel to SF but I may just have to go back over and over again to Coqueta.