The bar at La Grande Orange

I recently went to La Grande Orange for a friend’s birthday. I hadn’t been in years but she loves their kale salad.

We ate in the bar so I had a chance to check out the back bar. There were some interesting selections that I found unusual at a restaurant bar. A whiskey drinker wouldn’t be unhappy.

I opted to have the Goodnight Emily which featured Ford’s gin. It was perhaps a bit enthusiastic on the grapefruit oil which overwhelmed the mint but luckily I love grapefruit. It is my favorite citrus for drinks. 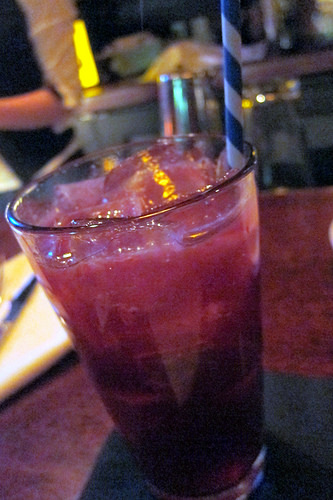 For my friend, I chose the French Sailor figuring she would find the Hum botanical spirit interesting. It’s a great drink for those who like fruity drinks.

what’s up with the shredded cheese?

Since we were at the bar, I decided to go with the cheese burger but I virtuously chose the kale salad instead of fries. I was a bit confused by the massive amount of shredded cheese on the burger instead of a slice. It tasted fine but was a bit weird.

La Grande Orange was very kind to send out a birthday treat for my friend. If I did a metro gold line bar crawl, this would be a convenient bar to hit up!