On my last trip to Las Vegas, I had a vague list of places to check out. So while I was in Chinatown (aka Pan-Asian Town as my friends and I are calling it), I spotted Izakaya Go and knew we had to check it out. A friend remarked as I ordered for our group of 8, I seemed to really know their menu even though I hadn’t been there before. True, I hadn’t but I’ve been to plenty of Japanese izakayas and home-style Japanese food is one of my faves. Set me loose at a Japanese place and I’ll come up with your best food game plan. And away we go to Izakaya Go!

But we also had a couple of others who enjoyed Japanese small plates and we had their input for what to order. This is a sampling of what we got. I may have missed some dishes that landed on the other side of our sunken booth (where we had to take off our shoes before climbing into the booth).

We started off with onigiri (rice balls) and worked through a few salads. 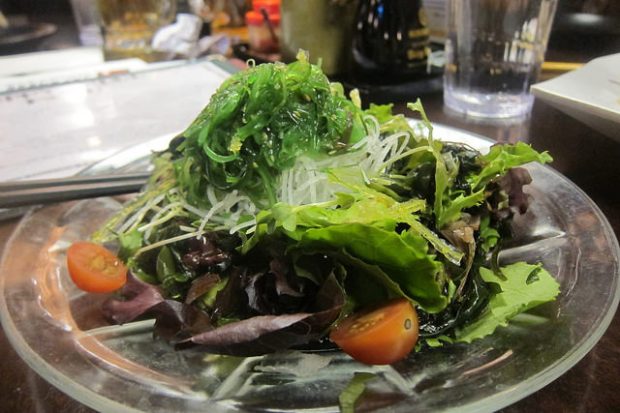 I ordered both seaweed salads wanting to know the difference. The one we’re used to seeing, the bright green strands topped some mixed greens. This was polished off quickly since we had a large group.

We ordered several dishes of edamame (soybeans). The classic Japanese snack kept us occupied until more food showed up. 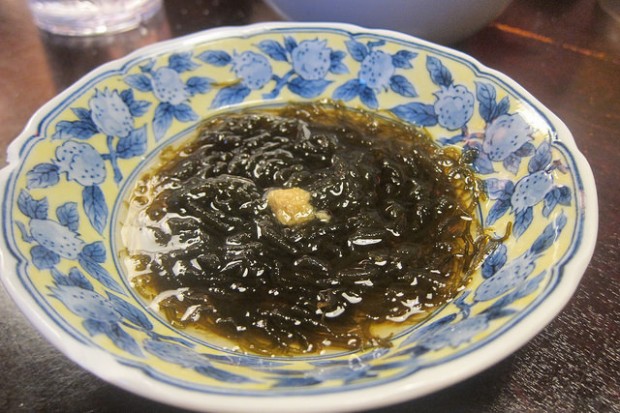 The other seaweed salad turned out to be slimier but I actually like this texture (I also like okra which has that similar slime). The Japanese love this texture. This was slurped up by a few.

We are also all seafood fands so the tender baby octopus went over very well.

We also hit the sushi and sashimi jackpot. We ordered a couple plates of sashimi including slightly spicy yellowtail topped with jalepeno slices. 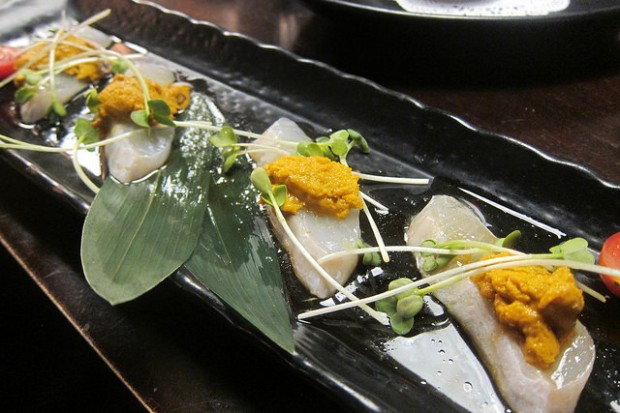 The hit though was the albacore with uni. Everything is better with uni as they say.

We had a nice crisp radish salad topped with bonito flakes. Think of it as a Japanese Caesar salad with the fish flakes.

The sushi was fine but I would order more cooked food next time. Though who can resist spicy tuna and avocado.

I only really wanted okra wrapped in bacon from the robata grill. Since our group was so large, we got several skewers of these.

We also had gyoza (dumplings). Our small plates meal was truly amazing as we ran the gamut of Japanese food.

My comfort food are warm bowls of porridge. The Japanese take (zosui) is really tasty with seafood, egg and a very savory broth.

One thought on “Las Vegas: Dinner at Izakaya Go”