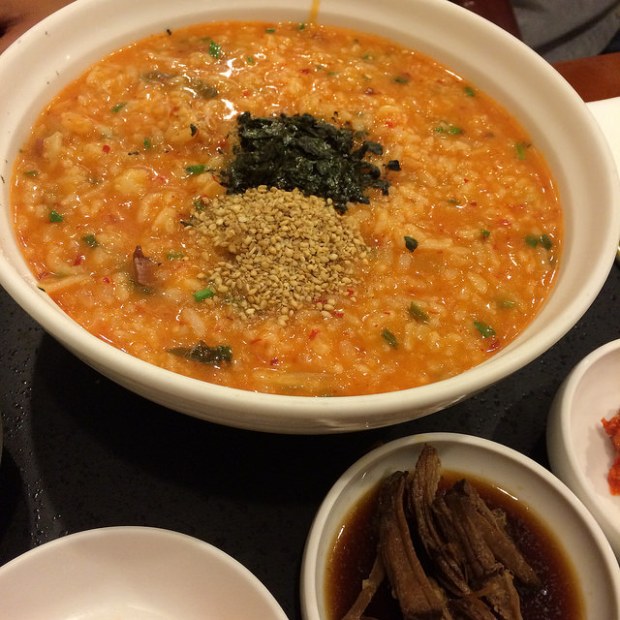 After a summer of not quite kicking colds quickly enough, I was downing soup like it was 65 degrees instead of the actual 95 degrees it was outside. But even a soup lover like me can get tired of noodle soups (gasp!). The next best thing is porridge. With that in mind, Bon Juk in Koreatown has created an entire restaurant dedicated to porridge. Most of the porridges are rice based but we encountered some interesting things as well. The menu descriptions help guide you to porridges dedicated to both specific health concerns and general well-being porridges.

The porridge is large enough to share so we parceled out small bowls to one another. I also enjoyed the selection of banchan; kimchi, beef and some chopped up chile stuff that I used as seasoning. We also had a cold soup which I found odd with the warming meal.

The pumpkin was definitely on the sweeter side. It had some dumplings and beans as well. The smooth texture was not enjoyed by all.

The other favorite was the savory chicken (not shown). As expected, this would be the cold ass kicker. So swing by Ktown the next time you’re in need of a common cold cure– or at least something to soothe you.

I actually would get my seafood porridge again but not before I tried the restaurant’s famous abalone one which comes in two sizes; the regular bowl is around $15 and the large is over $30. It seems the pricier one comes with more abalone.