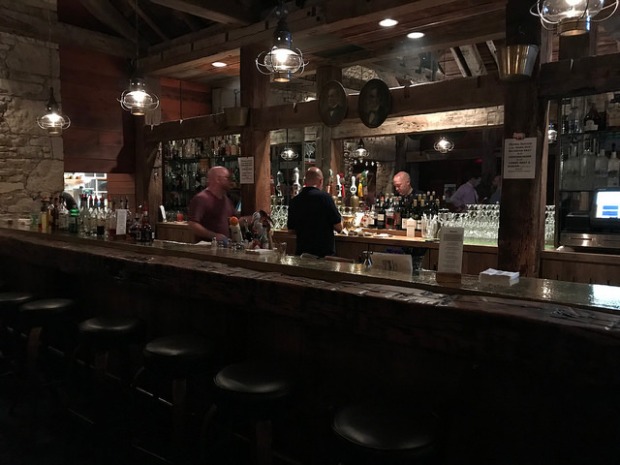 the bar at Quivey’s Grove

I landed in Madison on a Friday so it was a perfect time to go to Quivey’s Grove for the Friday Fish Fry. However, it looked like the clouds were about to burst so I was glad our reservations were in the historic building rather than the giant tent outside. When the rain really came down hard, I was so happy to be inside enjoying my Wisconsin brandy old fashioned cocktail.

A Wisconsin old fashioned is made with brandy with muddled oranges and cherries. It’s usually made with Korbel though you’ll find it with other brands. There’s been a push to use more local Wisconsin craft spirits. You can ask for it “sweet” which adds a splash of lemon lime soda (Sprite or 7-Up), “sour” which adds sour mix or squirt, “press” which adds seltzer with lemon/lime or “soda” which is just seltzer.

I asked for it “regular” which I believe is just the soda water.

Hazen board- meat and cheese plate

I really enjoyed the mushrooms and the duck strudel with dried cheeries. Plus, I was into building little open faced sandwiches with the meat and cheeses.

One of my favorite parts of the night though was discovering the bread basket contained muffins! And the kind I like, hearty ones with dried fruit.

I opted for the seafood chowder as the rain always puts me in a soup mood. Though who am I kidding, I’ll eat soup in 100 F degree weather.

Although we were there for the fish fry, I opted for the Heileman Bavarian dinner. Whenever I’m in the Midwest, I fall into this hearty meals mode. And a sausage plate with breaded pork sounded right. Plus I had never had weisswurst before. It turned out to be a very nice sausage. I really liked the potatoes as well.

But there’s always a next time right? The Friday fish fry was your choice of beer battered cod, baked cod, lake perch or a combo of all of it! It’s quite the deal too as it includes slaw, fries or a Parmasean potato and those delightful fruit muffins.

Be sure to leave time to explore the premises and have a drink at the Stable Grill.

Thanks to Greater Madison Convention and Visitors Bureau for the opportunity to check out Madison!