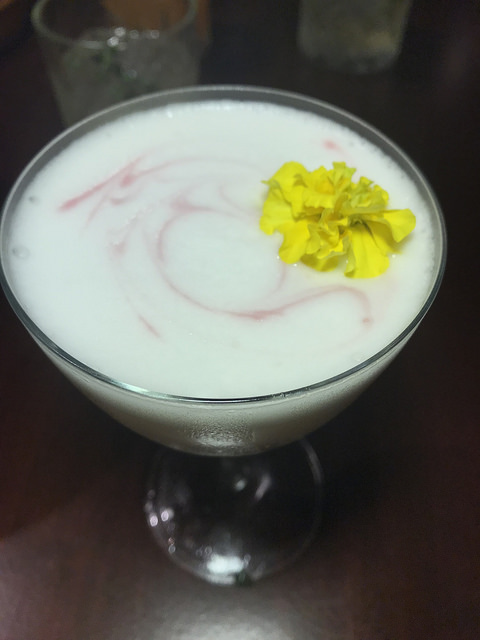 I’ve been anticipating the return of Clayton’s to DTLA since… well, forever. Its earlier incarnation as the Royal Clayton’s was located in the Arts District, across the way from Church and State. They shuttered and opened a few years later in the Spring Arcade building in the main part of Downtown Los Angeles. The historic DTLA building has rapidly become a food hall rivaling nearby Grand Central Market in terms of variety.

I stopped by one evening and checked out late night bar bites and drinks.

A friend started off with the Harry Johnson, a whiskey sour variation. In this case, it has Japanese whisky and the vegan substitute for egg whites; aquafaba which is garbanzo bean water. This was surprisingly not as light as I anticipated with the lighter Japanese whisky.  I suspect the absinthe had a lot to do with giving this drink some backbone. 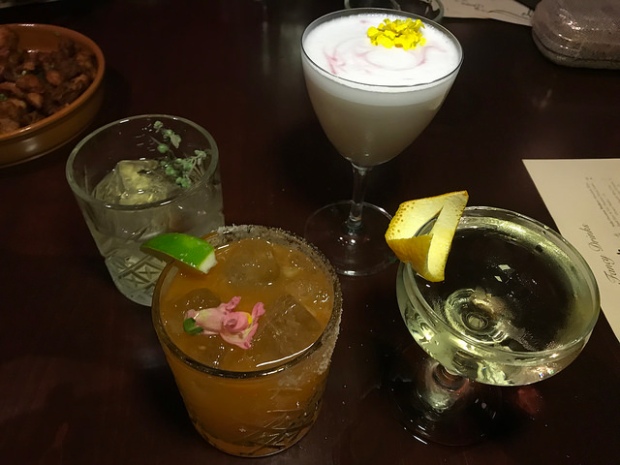 I did enjoy the fried chicken bites. But it’s rather hard to mess up fried chicken. These were tender, juicy and flavorful. It hardly needed the lime or dipping sauce.

I tried the Walker and Williams which wasn’t my cup of tea as it turns out. But everyone else at the table loved it. I’m not sure what I was expecting but perhaps the lavender threw me off.

I liked the texture of the mac and cheese well enough but I felt it was a bit under-seasoned. Either the cheese wasn’t salty enough which would be very unusual, or it was under-seasoned. It’s probably good though it was too salty. I really should be eating lower sodium foods anyway.

My favorite drink was the Maud Wagner which I knew I’d like based on the ingredients. It’s basically a fancy martini with gin, aquavit and bergamot bitters.  Cocchi Americano replaces the usual dry vermouth.

I’m looking forward to checking out the beer list and the full menu. Perhaps fish and chips for lunch!