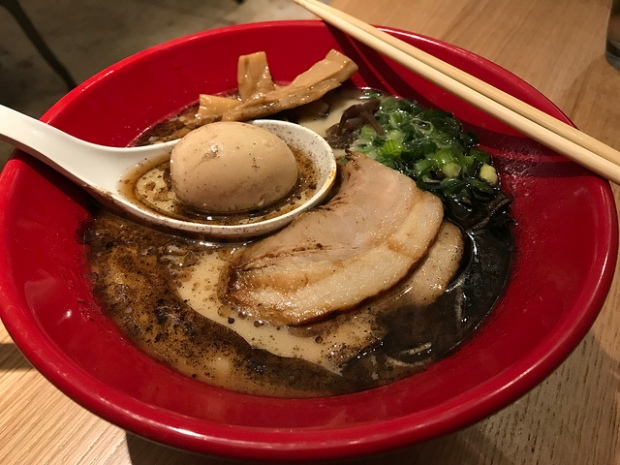 And by late night, I mean, we rushed to get over to Ippudo before they closed at 10 p.m. Since it was near closing, they were only serving ramen. That was fine with me as I was craving soupy noodles.

I’ve been hearing about Ippudo for years. One of the most things is that it’s probably the best ramen in New York. Well, let’s see how this new California resident does.

I ordered the akamaru ramen which builds on the original with some additional spices and paste. Our server said it was spicier but it wasn’t spicy to me at all. I did love the very clean broth and would like to try the karaka spicy next time.

I added bamboo shoots and an egg. I went with the hardboiled kind over a poached egg because I tend to prefer a marinated egg. I loved the bamboo shoots. The pork belly chasu was good but I wanted more! The bowl only came with two thin slices and some green onions. If you added a bunch of things to it, it would be a very pricey bowl.

I did feel because it was near closing time and we were the last customers, something was missed in my bowl. The noodles were possibly not rinsed and they were a bit gummy with starch. My friend liked her veggie ramen so it’s possible it was just my bowl.

Still, I’d go back to try the spicy bowl if I was on the Third Street Promenade and wanted a quite escape from the busy shopping zone.