Maikobe: There’s got to be other things in Old Town Pasadena 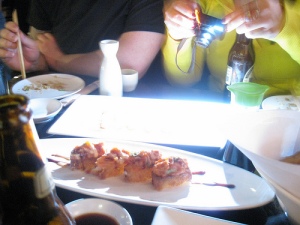 Carina from UncouthGourmands asked what was she going to do last night and I replied, happy hour! She mentioned Maikobe for hot sake. Personally, I’m not into hot sake as I prefer to actually taste my sake but I am always up for happy hour. Besides, Maikobe is where I first encountered Carina almost a year ago. It’s like a reunion of sorts. 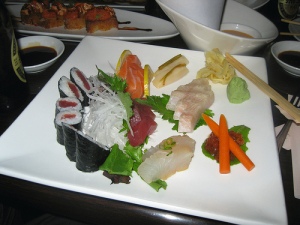 We gathered a group of five and ordered from the regular and happy hour menus. My go-to is the sashimi platter which I’ve had at least three other times and generally happy with it. It wasn’t great last night. The fish was definitely of a lower quality. I even found scales and bones. Ack. Possibly they thought I couldn’t tell the difference because I had two Asahi Blacks? Yeah, sure.

I did like there was some salmon roe though!

Service was tremendously bad and slow last night. I’ve been on other nights where the bar wasn’t too busy but there was some game on and about 25 people were clustered around the tiny bar, overlooked by a lone bartender who also tended to our table of five.

We are perhaps very demanding though. After all, we’re paying money to a place to give us booze and food. It’s a lot to ask, I know.

We ordered more food of course but other than the soy nuggets, none are really worth mentioning. The soy nuggets featured actual chunks of soybeans.

Carina had gotten a white tuna carpaccio but said there was another white fish with with truffle oil that was better.

Both were pretty good. The first tasted strongly of yuzu, a citrus I like. The latter was slightly more cooked than I would have liked.

Overall, we had a great time with our friends but service could have been better, especially after additional servers came on board. At least there’s some crazy decor. I leave you with the clown, excuse me, model’s picture in the restroom and the lucky kitty with red cowboy hat.

Cowboy Kitty at the Bar

After waiting 45 minutes for more service, we decided to beat it to some place else for dessert. After all, there’s got to be other things in Old Town Pasadena.