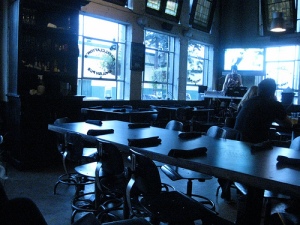 On Sunday, I met a guy at Royal Clayton‘s who expressed to me why dating in LA sucks. He essentially said there were no viable candidates. I told him I felt vaguely insulted.

However, I do know what he means. He can’t seem to find a normal girl. Nor can I seem to find a normal guy. I somewhat feel it’s partially because I live in Los Angeles where everyone has their group of friends and no one really goes out of their way to make new friends but also because of the age we live in. As I’ve stated before, online dating makes it way too easy.

Beauty is in the eye of the Beer holder.

This is a quote above the Royal Clayton’s bar.

I’ve been told I’m picky. However, I don’t think it’s a bad thing to be selective. Especially now when I don’t really want to waste my time in relationships that aren’t fulfilling. I’m not looking for “the one.” Nor do I want something traditional like marriage or kids. But I do believe strongly in the word “partner” and “boyfriend.”

I miss those micro-relationships. Those moments when you know that guy isn’t good enough but he’s there. He’s fun and games and not altogether bad. He’s just not boyfriend material. However, I know if I get involved with a micro-relationship, I may not be open to meeting that partner, that boyfriend.

I have a general notion of what I want in a guy. This apparently makes me picky.  Is it really terrible to want to be happy? This guy asked me what was my shortest date. I thought maybe it was 30 minutes but it’s probably closer to an hour. I’m a nice girl! Though sometimes I wish I wasn’t hence this horrible date last year.

Stop looking. Keep looking. I can’t decide. But now I’m 3 days away from the craziest singles party I’ve heard so I guess I’m committed to at least keep looking for now.

As I finished up happy hour at at Royal Clayton’s with my bloody mary and Gloucestershire (sliced pork sausage sandwich), I wondered what’s in store for me this weekend. 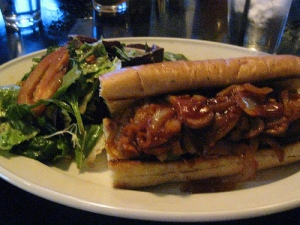 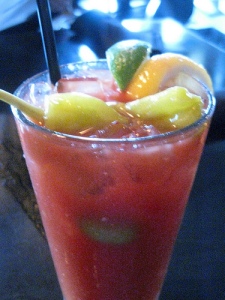 Well, at least I know there’s food and booze involved.