After playing Camera Assassins all day, I met up with friends at Boss Sushi. In LA, almost everyone loves sushi. There’s always talk about which is the favorite place. Boss Sushi is not my favorite but I enjoy it. And they have a $40 omakase which includes 9 items. However, it’s now apparently 8 items. Our server said the table-top menu was wrong and whisked it away. My friends were soured on this experience but in actuality, it really is a ton of food. 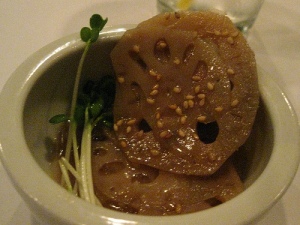 The hasukinpira or lotus root was a nice starter. I loved how thin each piece was, retaining a bit of a crunch.

I admit it, I like spicy tuna. And these two chips worth were generously topped with the stuff and tobiko. 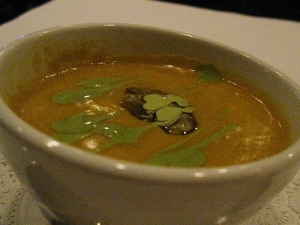 The warm pumpkin soup was quite nice. I liked the little bit of mushroom in it.

Boss Sushi if you haven’t guessed by now is into nouveau sauces not generally associated with purist sushi. And certainly not sashimi. But to hell with those purists, I like this type of sushi and sashimi every now at then. As long as there’s no cream cheese in the roll, of course. See my flickr set for close ups on the sashimi and other pictures.

We also had the nasumiso (the miso eggplant) and the chef’s special that day was grilled salmon. My piece still had the skin including part of the fin on it! 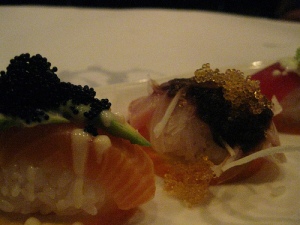 Just when you think you can’t eat any more, you get served 5 pieces of sushi. These nigiri comes with flair, meaning tons of sauce and tobiko. I didn’t quite like the sushi sitting on orange slices though. The pith lent a bitter quality to the rice.

At this point, we started wondering where was our chawan mushi but that was the item they took off the new omakase. Just as well as we were ready for dessert. Unfortunately, we didn’t much like the fried banana.

Who’s the boss? Boss Sushi. Not my favorite but a very reliable place with locals who do adore it. I highly suggest reservations or go during off hours. I’ve not sat at the sushi bar which is generally my choice at sushi restaurants but the tables generally are quite lively.