Hope in a Jar

Suzanne Tract, owner and executive chef of Jar Restaurant must have the magic touch. I could not fathom how else could the entire restaurant be so packed the day taxes were due. Sure, we had a BlackBoard Eats code and it was expiring that night but why is everyone at this restaurant at the same time I want to eat? 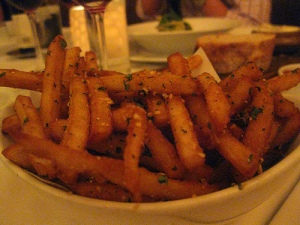 When I walked in for my reservations last Thursday, I found my table wasn’t ready yet. While I normally would wait at the bar, this particular bar was crowded. There was a constant shuffle to let people go past to the restrooms. It was just too crowded. After about 30 minutes, we were led to a nice table but with no real apology for the delay. 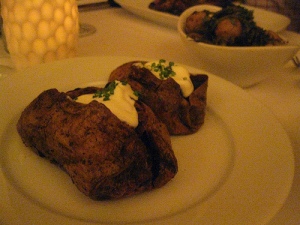 We really enjoyed our food. I enjoyed and loved my meal the night before at Ludobites (and also waited about 30 minutes for my table), I felt the food at Jar had to be good to make up for the craziness of the night.

Of the various items I tried that night, my own nitpicks would be I felt the turnips could have been cooked longer and therefore would have been sweeter. And I wouldn’t order the duck fried rice again. While I liked the flavor, the rice was just too hard and crunchy. I understand this is probably the style they were going for but I didn’t care for it. 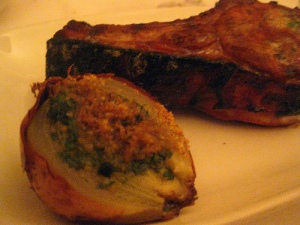 The steak was supposed to be medium rare but came out very rare. It had to be sent back. Fortunately, didn’t lose any flavor after its trip back to the kitchen.

The braised lamb shank was enormous! That and the liver compared to the tiny portion of the pot roast had me raising my eyebrows (in a squiggly Minty fashion). All were good but I was very pleased after taking a bite out of my char siu porkchop. It was a last minute decision for me. While I love porkchops, I tend to be disappointed half the time and vow to make a better chop at home. Jar came through for me and I would order this again. I also really liked the half of an onion that came with the dish. 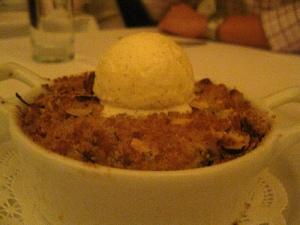 ← Sexy Singles Soiree: One Night Only!
Unique LA: This Weekend →