On Sunday, a band of 10 braved the wilds of Silver Lake in search of the best fish tacos LA had to offer.

We first stopped at Best Fish Tacos in Ensenada. A lofty title and it was a good place to start. It turned out to be our group’s third favorite of the day.

What I enjoyed about this restaurant was you could control the amount of toppings you wanted on the tacos. The cabbage was also sliced super thin which was great. I put only guacamole (no salsa) on my tacos but even that had a kick to it.

Next up, we jaunted over to Mi Alma Garden to find Ricky. By now, most people have heard he’s the best fish tacos in town. He started on a street corner and the owners of the garden invited him to set up there. There’s also a vendor selling delicious fruity aqua frescas. 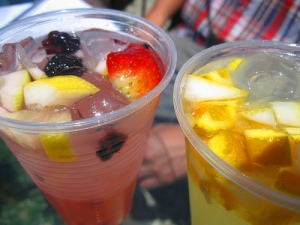 We enjoyed ourselves in the garden while our tacos were being prepared. It was like a mini Ojai to me. Or very much a nicer “secret garden” I’ve been to in the Hollywood Hills.

I really wanted to debunk the hype these were the best fish tacos. But alas, I could only add to the excitement. They were really very good. Definitely the best tortillas of the day as well. They tasted handmade.

The fish was delicate and the batter was seasoned correctly. I had a hard time deciding if I liked the shrimp or the fish more.

I didn’t have terribly high hopes for Tacos Delta but it was on our way to check out other fish tacos that I have heard good things about. This little shack was clean and I’d probably stop by again. I just wouldn’t get the fish tacos.

The fish taco actually kind of bummed me out. Those little curls you see are bits of fish so over-battered and deep fried, it was like more like eating a batter popcorn taco. 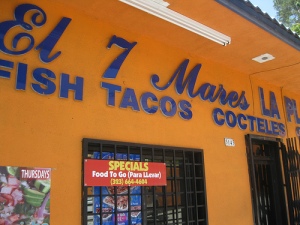 At El 7 Mares, I ended up getting the fish and shrimp taco combo because price-wise, it was a better deal. Unfortunately, I really disliked my tamarindo which was way too sweet.

My crawl peeps were quiet by this point. After starting off with okay fish tacos, getting fantastic tacos and then disappointed by the last place, we didn’t seem to be too enthused about El 7 Mares. I wasn’t too keen on the fish but I actually really  liked the shrimp taco. The individually fried shrimp was nice.

We were exhausted. But excited! Our last stop for fish tacos. I was losing people throughout the crawl. They would order other things (which I was guilty of as well) but we were all on board for fish tacos at Gloria’s.

What’s different about these tacos were the fish and shrimp weren’t battered. I think most of my group preferred these (after Ricky’s) but I was missing the crunch.

In the month of May, I’ll be doing two crawls. First up is tamales! See you soon!