I had an Indian roommate in college and have listed Indian food as one of my favorites from that point on. Going to her home and having the “real thing” has made me a bit of a snob. Still, I’ve had some enjoyable experiences lately and always look forward to trying a new restaurant.

Anisha and I were recently invited to try Royal Khyber in Santa Ana. The Puri family has been working on making desserts diabetic friendly for the past three years. But ever since they opened in 1980, they’ve been striving to make Indian food lighter and healthier.

Everything I had for lunch that day was so unlike anything I’ve had before. I will have to rethink my usual saag and naan order in favor of being adventurous. Think olive naan instead of garlic (though they have that too along with over 10 others), a seafood dish so like Italian cioppino and yes, those “don’t miss the sugar” desserts.

The smoked lamb cakes with the tamarind basil honey ginger sauce were wonderful. Not gamey at all. I could imagine eating these like sliders between a couple of pieces of naan.

Arun Puri, the owner of Royal Khyber came out to talk to us about dal soup. He said every Indian family makes their own version and most prefer their family’s recipe. Well, I don’t have an Indian family and I very much prefer this light aromatic soup. With a squeeze of lemon and fresh cracked pepper, it was even nicer.

This curried seafood dish was one of the most surprising of the day. It did not taste “Indian” at all to me. More like an Italian seafood soup! It must be the addition of white wine. I’d eat this with biryani.

I’m in love with this Bengali mustard oil fish dish. I love grainy mustards and never would have imagined creating a sauce for food. How perfect. Another great dish to dip naan in. 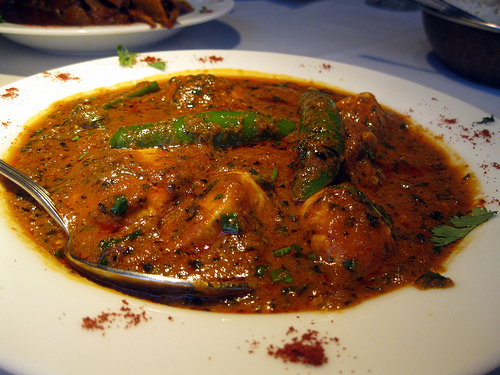 Arun mentioned that Royal Khyber only used spicy green chilis and these controlled the level of spice in the dish. You can always ask for less spice– or more!

This next dish, the Khyber’s Nectar is one of the restaurant’s specialties, the lamb shank is roasted for 14 hours which releases the marrow from the bone. Rumored to have been a favorite dish of India’s royalty for certain activities. You may imagine what those activities to be from the country that brought you the Kama Sutra!

I really couldn’t leave without having some saag. Spinach is my favorite and I liked this version with yellow lentils. It made the dish quite hearty. 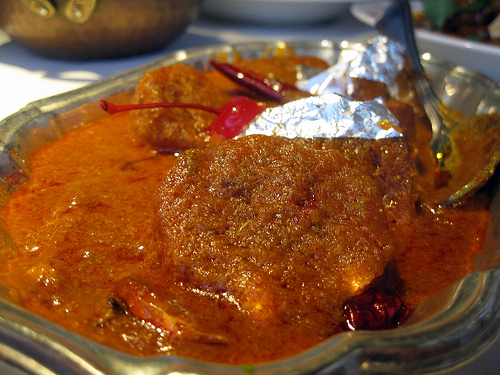 The Aloo features red-skinned potatoes stuffed with cheese. The sauce is apparently sap from an Indian tree. It’s a very pungent sauce and quite different. 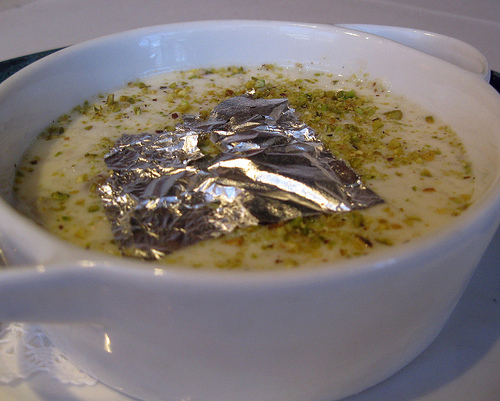 As mentioned earlier, Royal Khyber has been working on creating desserts with less sugar. They sent out three desserts where I had to taste, stop and think and then realize I didn’t miss the sugar at all. The syrup is mostly fructose with some glucose. It’s all-natural. So while the desserts are not sugar-free, they are still diabetic friendly. I actually preferred these lighter desserts to the heavy sugar soaked gulab jamun I’ve had in the past. The rice pudding was quite excellent with golden raisins and slivered nuts.

Royal Khyber is very close to the Orange County Performing Arts Center and South Coast Plaza. The next time I’m in the area for either, I’m stopping by. They have great lunch deals including a buffet on Fridays but this is the sort of restaurant you want to go to for special meals.