Seasons 52 opens today in Costa Mesa at the South Coast Plaza. Located in the downstairs space of the former Clubhouse, this fresh grill and wine bar restaurant offers items under 475 calories. With menus changing each season and new items available each week, Seasons 52 takes advantage of all the locally available fresh produce and products. 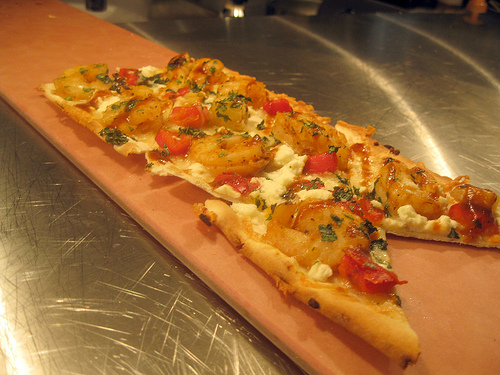 I was invited a couple of weeks ago to try highlights from their menu. Starting with two flatbreads; black mission fig and chipotle shrimp. The fig featured chevre, Nueske’s bacon, mint and wild arugula. And the shrimp had roasted poblanos, grilled pineaple and feta cheese.

Besides the outdoor patio with two fireplaces, this restaurant features a circular bar with a piano, a chef’s table and two dining rooms including a smaller room with audiovisual capabilities. It’d be great to have private events there and be able to project business presentations or recent vacation photos at family functions.

When I found out Seasons 52 didn’t use butter in any of their dishes, I couldn’t believe that something like the salmon would be flavorful but it was. Cooked on a fragrant cedar plank with just the barest amount of olive oil and with a squeeze of lemon, it didn’t need the butter. 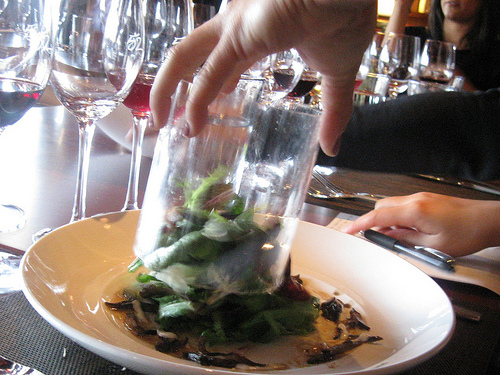 Our salad was made with truffle dressing, a dressing that was only 5 ingredients. I liked how it was presented as well. 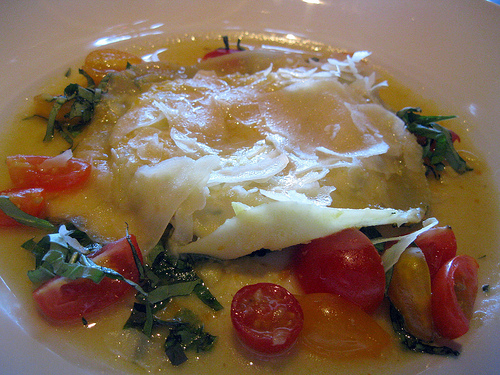 Senior Culinary Director Clifford Pleau demonstrated how to make ravioli using Sonoma goat cheese. For him to say he knew the lady who owned the goat farm was very impressive. I still can’t believe this dish is under 475 calories.

Cliff had been demonstrating several items of what we were eating but I was most intrigued by the eggplant sitting on the table. I have never been able to master cooking eggplant. It was always too bitter. I knew about sprinkling it with salt but Cliff showed us to soak the eggplant in salted water. It drew out the bitterness but the eggplant absorbed some of the water so when cooking, it didn’t absorb the oil. Genius! 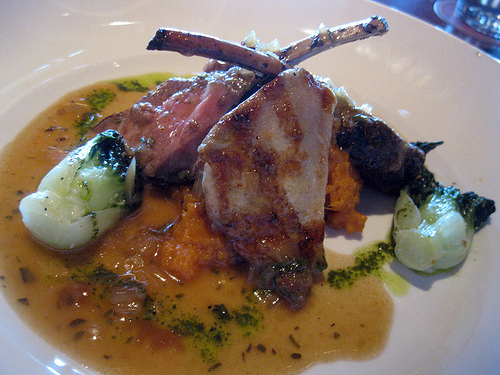 I have to say this dish had a lot of elements going on. I would almost say it’s a summer into autumn dish with the baby bok choy, the bourbon mashed yams, lamb and quail.

We ended with a sweet note. I chose the peanut butter and chocolate dessert. I’ve of the mind that a couple of bites of dessert is all I need so I was delighted that Seasons 52 shares that philosophy by offering smaller portions of desserts. These were adorable in shot glasses.