Being in the LA foodie cabal, I’ve witnessed a very interesting trend in LA- the popup. 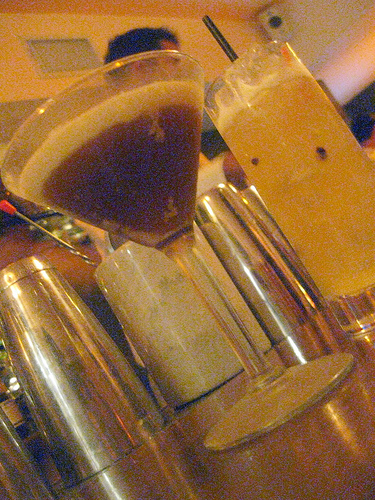 The days of hot restaurants being the sort that had a 3-month reservation wait may be waning as foodies find exciting food at food trucks, supper clubs and the popup restaurants sprouting around town. I get asked frequently what’s the best restaurant in LA. I like to tell them my two memorable meals last year were the first times I went to Ludobites and Animal. Most people have heard of Animal but they always want to know about Ludobites. Once explained, they want to know how to get a reservation. Social networking plays a key role but lately, it’s been a lot of luck as well. With reservations selling out in an hour or less, love or hate him, Chef Ludo is the king of the Popup. 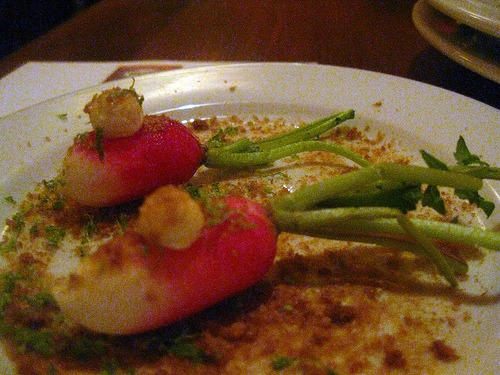 Last week was the first week and featured Red Medicine, a new Vietnamese fusion restaurant coming soon. They brought 12 dishes for $40. I went on the last night with Carina. I wanted to thank her for showing me around SF a couple weeks back. We decided to go early to see if maybe our reservation could be moved up (in fact, it was delayed 30 minutes because of the crush of people). We ended up trying four of the cocktails from the Red Medicine list and a cocktail from Julian Cox of Rivera who is on the mixology team at Test Kitchen (Test Kitchen shares some of the same owners as Rivera and they are testing out concepts for upcoming R26, a more casual place taking over the old Grace space).

When finally seated, the onslaught was fierce. Fortunately for us, the portions were appropriate for a 12-course tasting. We left without feeling outrageously full but full enough. What I was full of though was the camaraderie between all the food folks in the room- from future Test Kitchen chefs, mixologists, famous diners, bloggers, foodies and the curious trend seekers, we were united in what felt like an underground club. I overheard the table next to me say getting a reservation for Test Kitchen was easier than Ludobites. Possibly but I have a feeling not for very long. Although it’s a mystery which chefs are coming to Test Kitchen (and when), people are already booking. I have two reservations for next week- one for when Ricardo Zarate of Mo-Chica does Cebiche night and another after Neal Fraser of Grace has a turn at the stoves. 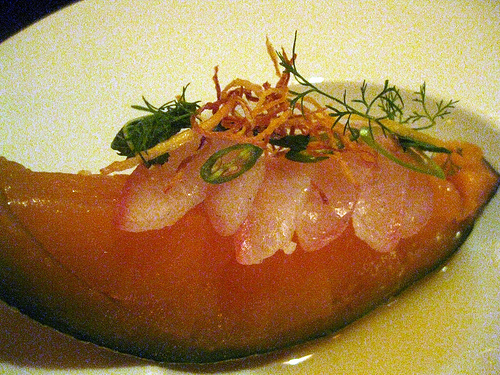 I don’t watch much TV but when I do, it’s usually some sort of food show (I’m guilty of also reading cookbooks). Recently, I’ve seen two episodes of 24-Hour Restaurant Battle. Being at Test Kitchen sort of felt like I was being filmed for if not this show, then some sort of other reality food show. I was asked throughout the night how did I feel about the food. While this isn’t unusual, it felt different somehow. You are a judge of this meal. These are the items that may make it to the “real” restaurant one day.

Of the cocktails, I really liked how fresh ingredients were used. They were light and went well with the food. However, I’m a bourbon girl and that Fiscal Agent I had from Julian was probably my favorite cocktail of the night.

The menu stated we were to get the items in “no particular order” though we did start with the first item listed, the radishes. These are fresh radishes with most of their stems attached. The bitterness of those greens went well with the lime and dried soy. Next, we received the brussel sprouts. The fish sauce was prominent but was tamed by the prawn crackers.

Before arriving, everyone told me their favorite dish was the amberjack and it was indeed good. It was beautifully presented on the French melon. I actually really liked the Saigon Tartine, a version of a traditional banh mi. The pork belly was a nice piece.

TOMATOES marinated in an infusion of their vines, silky tofu, crunchy tofu, herbs

The silky tofu was very much like a pudding. It didn’t have a “tofu” flavor at all. I actually really liked it and reminded me of a savory yogurt dish. 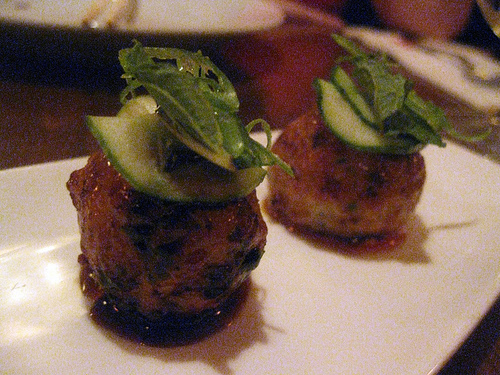 The only dish I didn’t like was the chicken. I felt they were too dry. 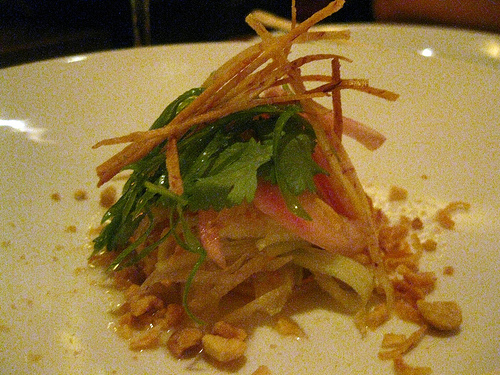 Um, yum! I loved everything about this dish but then I love crunchy, crispy things.

Of all the dishes listed, I was the least excited by the carrots. Big deal, carrots and black bean. I had imagined some sort of sauce. Imagine my surprise to see the carrots dyed so black, I mistook them for something else at first. The flavors were pretty good and made me almost forget how much I dislike carrots. But these were cooked, startlingly cushy and made me wonder how we could snag some more.

This was a fine dish. Very interesting to look at (do you eat the charred frisee?) and the sauce was good. I liked the punch of the pomelo.

This was the most beautiful dish to photograph. While I had to tweak all the pics (have I mentioned lately how I hate to take pics in dark restaurants?), this is the only one I did not. The beef was perfectly cooked and I liked the tiny minced celery. The eggplant was piquant and just the way I like it. 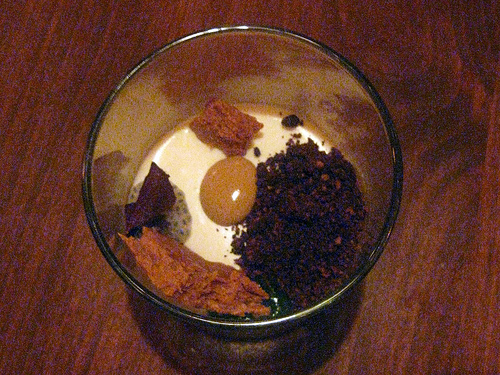 Some friends were dining earlier than us and when I asked them what did they like best, I got a resounding “dessert!” This particular pudding was delicious. I liked looking at it as if it was a terrarium. The peanut croquant was especially good.

Unfortunately, the peaches were either too ripe or too sodden with the creme de cassis. I like much crunchier peaches. Otherwise, it had promise.

Carina a glass of wine at some point but I was back on the cocktails train. I tried the Cocktail #1 which was very savory.

I’m looking forward to trying out more nights at Test Kitchen. I was particularly excited by the idea of Michael Voltaggio possibly signing on or if a chef does a “staff meal” type dinner for us regular, non-restaurant peeps. On this night, I saw quite a few curious chefs who were interested in signing on. But I don’t think I’m allowed to say who yet.