Foodies in LA have many ways to find out about the next hot dining trend. Frequently it is through blogs, traditional media and more than likely, word of mouth. In the case of the Supper Liberation Front, I found out via Foursquare. I noticed some friends checking in to some underground supper club. When questioned, they were tightlipped. A few weeks passed but I didn’t forget about it.

Then reports exploded. The first “public” notice I got was a dinner at a beer pub in Santa Monica. I didn’t go because I had other plans. The usual social media was at play. I saw friends “liking” SLF on Facebook, friends following them on Twitter and then pretty soon I was interested again and when I saw SLF was having a dinner at one of my favorite restaurants in LA, I signed up.

I did think it was odd they denied in emails and on their Facebook page who the chefs were. I clearly saw one tatted up Josh Gil that evening. But no sign of Daniel Snukal (unless he was in the kitchen and I didn’t actually look there). I did however see Jordan Kahn from the upcoming Red Medicine helping out.

Billed as a seven-course meal for $45, this seemed like a great deal. With only 50 seats and one seating at 7:30, I thought I had plenty of time to make it to a dear friend’s birthday shindig. Yes, I know it was multi-courses but I’m not a newb. This should have taken about 3 hours in my estimation.

Except they were 2 hours late. The first two amuses (frankly I do not like it when amuses are billed as courses so this is really a 5-course dinner for $45) came out after 9 p.m. But where was the mezcal? There was supposed to be Pierde Almas Mezcal tastings with each course. Our server, the poor thing, said the booze was forthcoming.

The first amuse, a spring roll was fine. The second amuse was slimey and weird.

It is now 9:30 p.m. I was rather grumpy to have been sitting around for two hours with not much food. I had to order chips and salsa as well as a drink with protein (that would be a horchata with nuts). F for Food insisted I take a picture of her plate as it was prettier than mine. Perhaps it’s because she actually had two slices of toro compared to my one. We debated whether that was a fluke (I’m sure it was) or they were really trying to starve me. 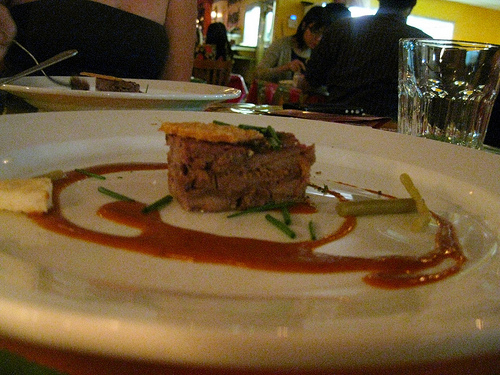 It was at this point I started talking to the Universe (i.e. tweet). I was told by some familiar with SLF that being late or taking a long time was their MO. Well, geez!

Oh, the beef tongue was good if not entirely timely. The terrine featured chile amarillo, herbs, pickled trotter emulsion and rice crackers. It was architecturally lovely to look at. Even J. Gold (who was at the neighboring table) seemed to like it? Although he makes more mention of the mezcal.

Ah yes, the mezcal- the first two were fire water (not bad at all) but not really very smokey. 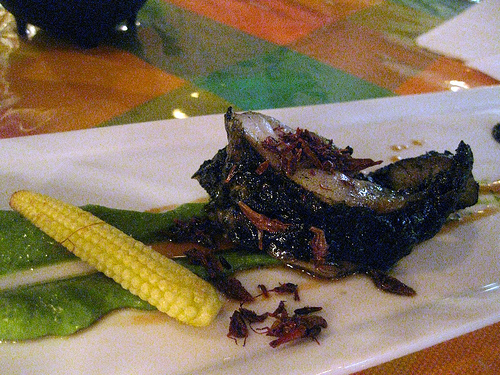 Looking around the room, this was the first dish to not have wolfed down. I was involved cutting away the skin– no, not because they were rubbed in a mixture of mashed up grasshoppers but because I don’t eat skin– so I didn’t notice immediately people weren’t eating this dish. I believe it’s the texture. Although not raw, it was clearly not cooked. I just dabbed on some avocado puree and ate it. Chew. Chew. Chew. Okay, weird.

I won the battle for taking a picture of my own plate. Elliott of F for Food thought I should have taken a pic of hers as the raisins were perfectly lined up but I liked how organic everything looked on this plate. It was natural. And the food was actually the best dish of the night. I enjoyed the large raisins, the spiced parsnip puree, even the titillating agave worm powder.

I was starting to enjoy the mezcal.

I’m struggling to describe this. Is it a pudding? It was as if several elements were told to go play and the result was this plate. I tried to eat it, hoping the sweetness would combat the sour feelings.

But alas, I was not happy. Mainly because these three things:

1. So they were late. Okay, things happen. Don’t you think you should apologize? To this day, I have yet to receive anything from SLF. I have however received notes from the host restaurant which I have not named because you can find that information easily enough. I do not blame them and hold SLF entirely responsible. I should have known when I arrived 20 minutes early and was told they were still prepping things were not going well in the kitchen.

2. Oh, I know! Let’s send out an email blast during a current dinner that was clearly in the weeds about the next dinner. Yeah, it wasn’t so cool to get an email while I was waiting for their darn dinner to start. I forgot to UNSUBSCRIBE so I better do that now. Sure, you could say they had that pre-scheduled. I was not feeling sympathetic, however.

3. Hey, thanks for the mezcal. But should you be drinking it while plating? Or that cocktail? I see you. Stop it and pay attention!

And so this concludes any more forays into the SLF. I’m not joining this guerilla dining army.

I don’t give stars or ratings but this clearly deserves a big BOO-HISS.