Last Friday, Pablo Moix of La Descarga did a stint at Guelaguetza. He along with Matt Doerr (bar manager for the upcoming Red Medicine) took up the bar and spun out five mezcal cocktails featuring fresh fruit, herbs and even vegetables (jicama).

Caroline on Crack and I headed over to the bar before my dinner reservation. She had the El Coyote (watermelon, mint, lime and soda) while I tried out the Cocktel Es’Steve (papaya, Thai basil, lemon and soda). At first sip, I couldn’t taste the difference. Pablo was worried the papaya was overpowering. Gradually did I notice the difference. Yes, the papaya was sweeter. 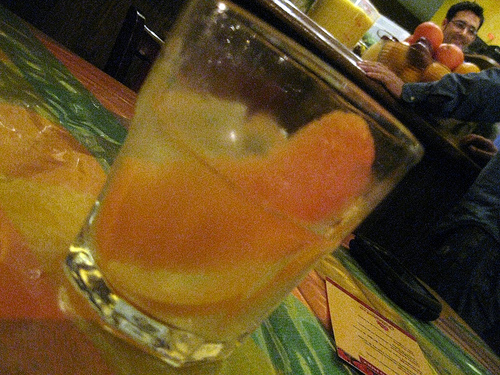 By this point, Street Gourmet LA arrived and he asked Pablo for something that wasn’t too sweet. He was presented with the Gun Smoke. Admittedly I have a better pic of this cocktail but I love Pablo peeking out in the upper right hand corner. 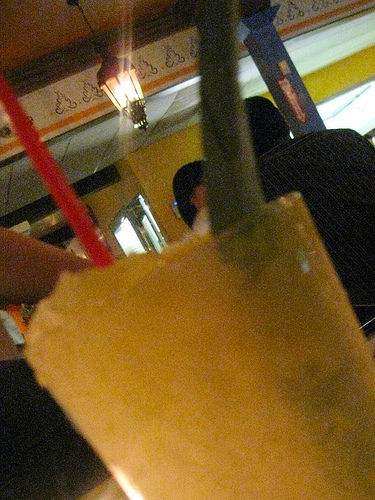 I left my drinking buddies at the bar and ordered a Gun Smoke for my own. The lovely F for Food had the El Angel Gabriel. She asked the vermouth to be substituted with Lillet which worked out well.The cocktail also included fresh pineapple, lemon, honey and soda.

I found it hilarious and appropriate Pablo had a cocktail called the La Descarga as that is his home bar. This cocktail featured jicama, ginger and lime. Very lovely.