The Taste: Secrets from the Kitchen & Cellar Recap

As previously mentioned there were 9 The Taste events and I was able to attend two. I also attended the Burgers and Beer event on the opening night of the food festival. The second day started out with a bang at the Secrets from the Kitchen and Cellar event.

Giving my poor body less than 12 hours to digest the previous night, I decided to try to go light as possible. I started out with the watermelon and seaweed salad from Chaya Brasserie. Chef Haru was all smiles greeting everyone that swung by his booth. His booth was the only one I had seconds at.

Besides the crispy lotus root and seaweed salad from Mr. Chow, I had their honey walnut shrimp. I have to say the shrimp was really good.

I hadn’t intended to stop by the McCormick & Schmick’s booth but then I heard foie gras and I couldn’t resist this tower of albacore. I was assured this wasn’t spicy tuna.

I stopped for a gin & Aperol cocktail from Mezze.

The duck shwarma from Momed was great. 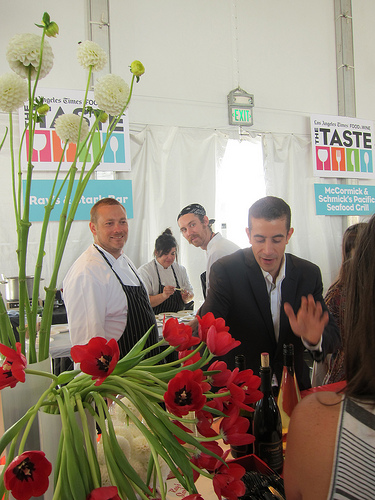 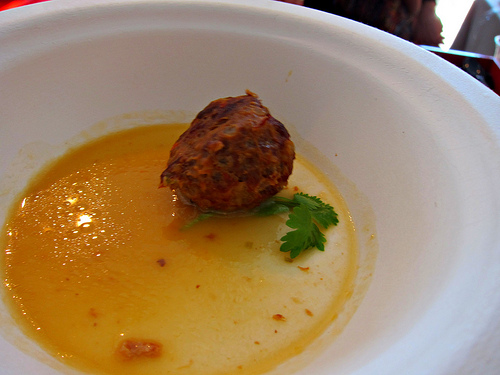 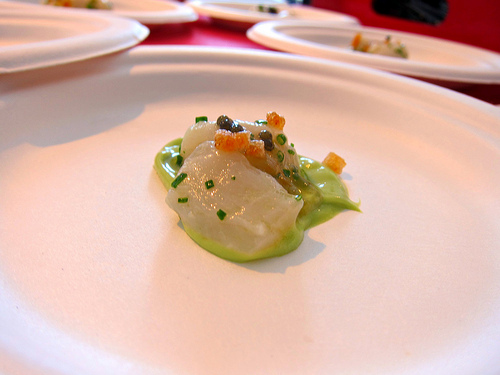 Ray’s & Stark Bar presented scallops and meatballs in the morning. We headed back in the afternoon to try the lamb.

Oh! It was served with goat cheese. It was pretty gamey so if you don’t like the taste of wild animals, this was probably not for you.

I read an interesting story about pisco punch and how there is no known recipe. I think that’s great for bars to come up with their own. Pablo Moix was mixing up punch for Black Market to be served with their slider.

Having the lamb cigar from Cafe del Rey reminded me I hadn’t been in a while. I also enjoyed the lobster ceviche.

Of course I ate the non-vegetarian version of these beans from Craft. 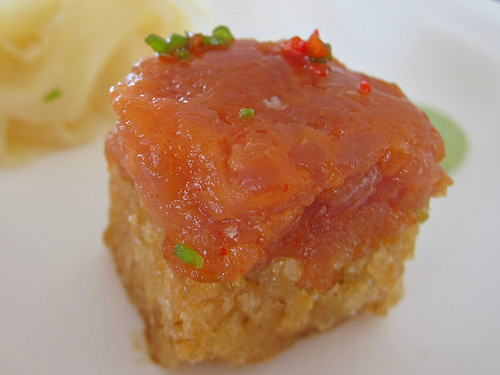 LA’s favorite sushi appetizer- spicy tuna on crispy rice from K-Zo. I would like to try this sushi joint soon.

I noticed the bite sized morsels from Wood & Vine were going fast. 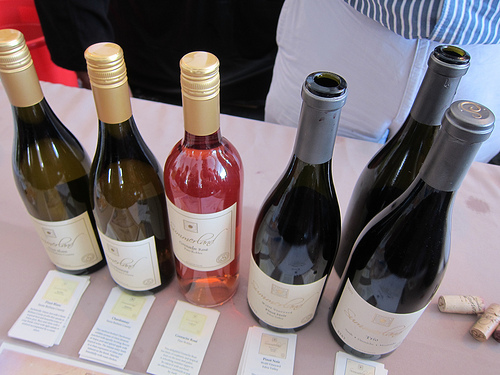 It was very cool to go “wine tasting” through the event. We tried a few sips from Coppola and Brassfield Estate Wines. 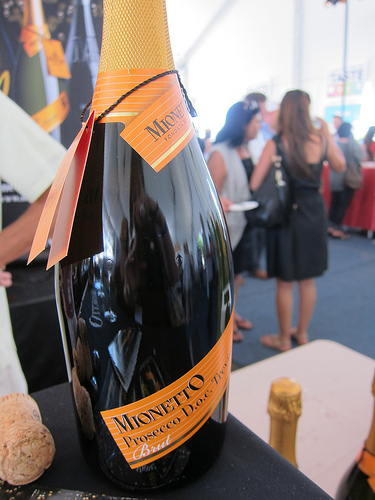 Though my favorite discovery was making my own belinis with Cuties tangerine juice and Mionetto Prosecco.

Though I’m not sure why I bothered since it was easy to get a mixed drink. Pictured are the Green Bloody Marys from Karlsson’s Gold Vodka. There was pineapple in these. 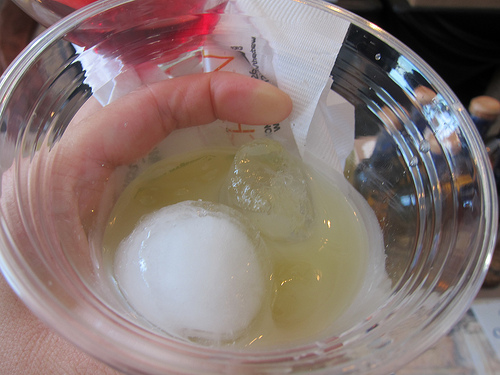 However my favorite cocktail of the day turned out to be the 4 Copas margarita with the adorable round ice cube. 4 Copas is the first certified organic tequila in the United States.

It’s not a food fest unless someone makes gazpacho! I enjoyed Napa Valley Grille’s gazpacho along with their beef jerkey. They also had duck but I didn’t try that jerky. The halibut was good, if a tad too salty.

I was kind of surprised Scarpetta didn’t bring any of their famous spaghetti but I suppose it’s easier to give everyone slices of (yummy) yellowtail.

I don’t think Chef Kerry Simon ever sleeps. He brought beef to the table after burgers the previous night.

The chefs of Sotto- Steve and Zach 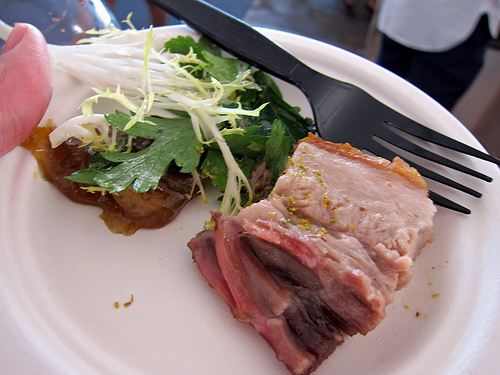 I watched an elderly Jewish couple yell at Chef Zach of Sotto for bringing pork to the Taste. Okay, if you don’t want any, move along. ‘Cause Mama wanted some pork! And how juicy and swine-y it was.

Next booth over, Picca was serving beef wraps. I was pretty happy with this day’s haul. I could have ended it there…

but Chef Celestino Drago spotted me and insisted I have the pork belly from his smaller restaurant, Enoteca Drago. I haven’t been in yet but will soon.

Then he walked me over to his brother’s restaurant, Il Pastaio and had me try the spaghetti wrapped in eggplant. He said this was the sort of dish he and his brothers ate growing up. It was a very comforting way to end the day. Especially since I had a hefty slug of wine.

The best pour of the day came from Bodegas Salatein. I suspect because they were wrapping up.

3 thoughts on “The Taste: Secrets from the Kitchen & Cellar Recap”