Son of a Peach

Tuesday night was my fifth time at Test Kitchen. Earlier in the evening, I attended a lecture featuring four celebrity chefs including Ludo. By sheer coincidence, I was going for the Sous Chefs Team night, one of whom was Ludo’s sous chef at Ludobites, Chef Dan Moody. Also cooking last night were chefs Amanda Baumgarten of Water Grill and Dyllan Hallas of the upcoming Farm Shop.

I follow Chef Dan on twitter and it was quite the nail biting experience. Was he going to be able to get all his ingredients in time to make this dish of foie gras powdered donuts? As it turned out, FedEx came through for him and we all enjoyed these donuts. 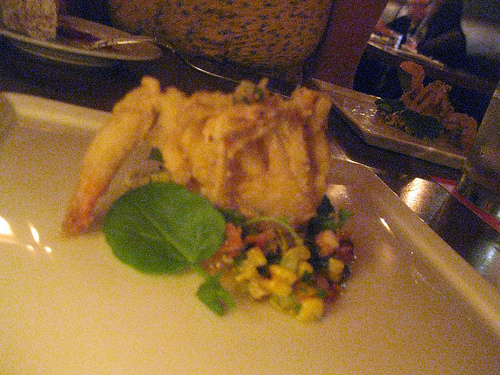 I’m going to readily admit I don’t watch TV regularly and have only seen one episode of Chef Amanda on Top Chef. I have been to Water Grill exactly once but it was years before she started as a sous there. In any case, I had no expectations other than the fact soft shell crab is one of my favorite things in the world. I found this to be delightful. The crab was nicely meaty and although F for Food thought it needed more tartness, I as fine with it. And usually I’m the acid queen. But it probably helped I was drinking the What a Jerk cocktail at the time and it had a lot lemon in the cocktail.

Chef Dyllan brought this tartine of chanterelle mushrooms, bone marrow and herb salad. The flavors were lovely. It was like an elongated crostini. A bit of work to cut up bite sized pieces of bread but the reward was good. The more I ate it, the more I liked it. 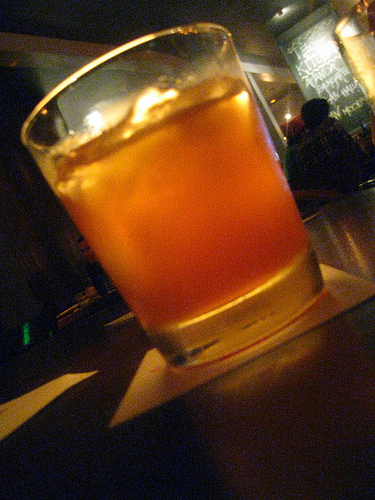 I originally wanted to try the Son of a Peach first but they were out of the specially made syrup mixologist Brian Summers of Library Bar made so I started with the What a Jerk. I really enjoyed that subtle St. Elizabeth allspice in it.

There was a pause between the third and fourth course. I took this opportunity to order the Trinidadian Ice Dreams and to visit the loo. There was a slight mixup and another drink was ordered for me. The Internal Affair arrived first. Oh tequila, you sneaky thing. Mixologist Joel Black also gifted me a shot of what is now dubbed the Drunken Girl Scout.  It was like the best Girl Scout cookie shot I’ve ever had. No fake schnapps flavor here! 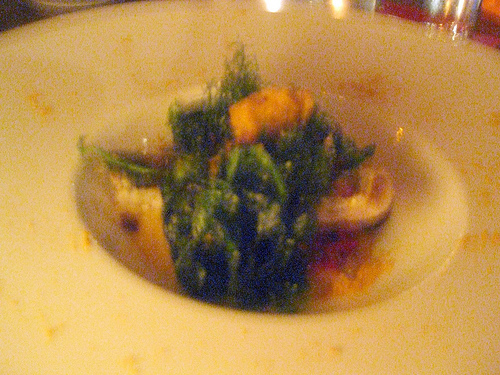 I thought it was interesting we had two fish courses but no red meat. First up was Chef Dan’s bass. I liked all the flavors individually but to borrow F for Food’s phrase, I don’t know if they were shaking hands with each other.

On the other hand, the salmon from Chef Amanda needed the other ingredients to work. I really liked the leek and date compote spooned over the fish.

The Trinidadian Ice Dreams showed up right around dessert. We had fun playing around with lighting here. It was like the most delicious ice cream shake.

Finally, the dessert arrived from Chef Dyllan. When I spoke with him later about it, he said none of them had wanted to get stuck with dessert. He originally planned this dish to be more savory. It had a touch of salt which was subtle and I enjoyed this over heavier desserts I’ve had in the past. This easily was one of my favorites.

Then we were off to the bar for a bit where miraculously there was enough syrup to make a Son of a Peach.  It was love at first sip. I also tasted a Testing Cocktail made at the spur of the moment aptly named Momento (bourbon and fruit).

For beautiful pictures of the night, check out the Gastronomnom.

My other Test Kitchen blogs:

← Are Celebrity Chefs Good for Food?
Soul in the Bowl, Part I →