About a month ago, I went to Ludobites at Gram & Papa’s and had a great time.  I also had reservations for last week and knew I was going to have fun. If it was at all possible, the meal was even better than a month ago.

Although many people love to hate Ludo and some love him because it’s popular to do so, I genuinely adore his food. I’ve mentioned before I’ve never seen him on TV and I still haven’t (I’m just not home enough to watch TV!). I go because I like the food.

We ordered the entire menu. This is the fifth time I’ve done this. I found it interesting Ludo mentioned it in this article how people do that. Because I have never just ordered a few dishes, I actually find it interesting to hear what people chose to order. 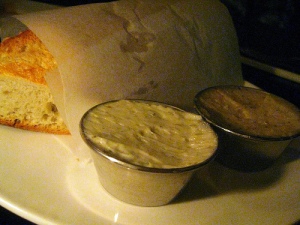 There’s been a lot of talk about the smoked lard. Some find fat icky. There’s no other word for it. Icky. Yeah, I’m the type that cuts off the fat from a steak and I don’t really eat skin or innards but I did try this lard. It was like, salty butter. Seriously! It was good but I can slather than honey lavender all over myself and be happy. Um. Er. Well, in any case, when they came to clear our table, guess what we kept? The fats. 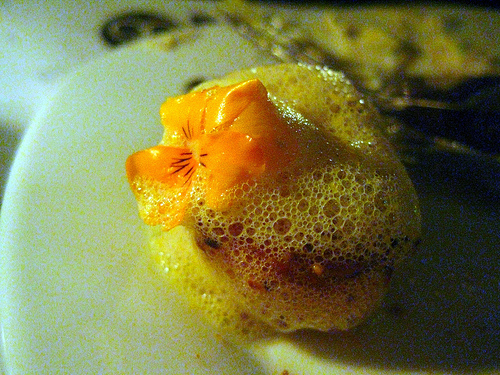 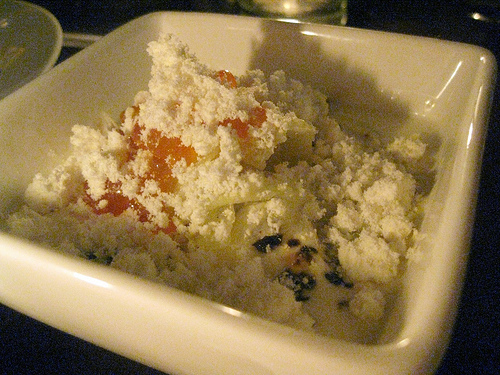 I’ve been trying to hit the Ludobites pop-ups early in the run and at the end to see how the menu evolved. The scallops were now served with a bit of a foam and the asparagus soup has mozzarella in it along with a sprinkle of foie gras powder. While I liked the dishes, I preferred the earlier incarnation of the scallop but no wrong can be done to the soup. The mozarella really went well with the already delicious soup.

The same people who probably hate fat would find it disgusting to eat blood. While I love my steak medium rare, I’ve never been able to eat congealed pig’s blood commonly served at Chinese dim sum. There’s just something ugly about it to me.

So, did I eat this boudin noir mousse? You bet! It was very pretty and the sprinkle of salt was marvelous with the rich and creamy boudin. After having a bite, I actually thought about scraping up the last bit.

Over the last couple of weeks, the buzz has been for the foie gras powder until it was over taken by the crispy soft shell crab cornet with corona granita. We started considering getting another order but we were only half way through and had plenty of other dishes coming. 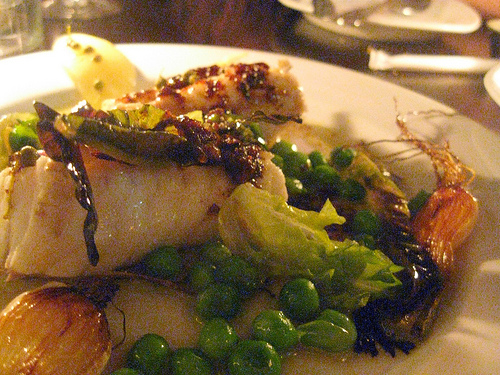 A few weeks ago when I had the monkfish, I was the only one at my table that really enjoyed it. I was looking forward to this dish again. And I couldn’t believe it. It was even better! It was juicier and I couldn’t stop the low moan that escaped. Need it. Want it. Eat it.

We had many, many, many other dishes but those were the highlights. I leave you now with a video of us breaking into the dark chocolate souffle.

For more pictures from our dinner, check them out here.

There are only a few more days left of this pop-up and then Ludo and Krissy are off exploring Oxnard (OMG, am I going to Oxnard in the summer???) then Thailand. See you at Ludobites 5.0!

← The People’s Cocktail Contest at Drago Centro
Battle of the Saag: New Delhi VS Lal Mirch →