This past Sunday, Angeleno Magazine hosted their 8th Annual Restaurant Awards at the Fairmont Mirarmar Hotel.

Restaurant of the Year: Hatfield’s

Outstanding Wine & Spirits: SAAM at the Bazaar by Jose Andres

Oustanding Service: The Grill on the Alley 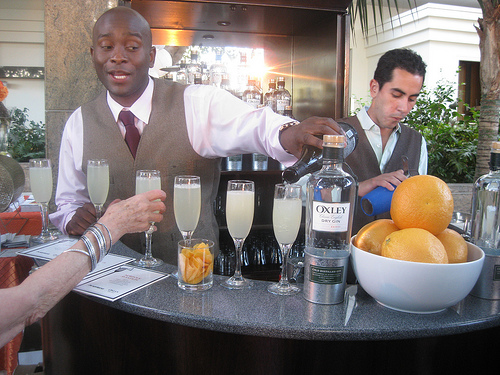 I won a pair of tickets for the event from Table 20 which featured food from almost 20 chefs. Because I was taking my time and chatting away, some tables ran out before I got a chance to check them out. Here are the highlights of what I had.

SAAM at the Bazaar 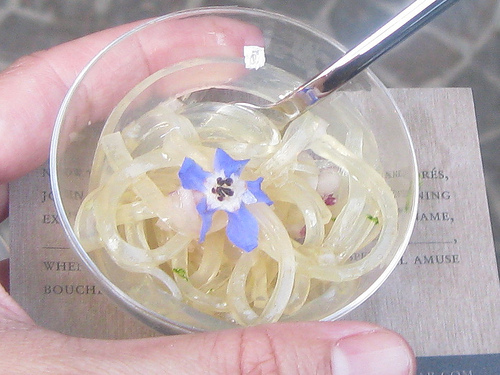 SAAM at the Bazaar

At the SAAM table, we were treated to tuna handrolls and their take on linguine and clams (made with geoduck clam).

We had the beef tartare with shaved truffles and baby artichokes from Angelini Osteria. Both winners.

We took a few cocktail breaks. I really liked Oxley Gin’s take on the French 75. Their Oxley 75 was quite refreshing. VeeV was showcasing their sangria and gimlets. I preferred the sangria with fresh fruit.

Oh man, when I saw those scallops on the grill from Culina, I almost tripped in my rush to get over there. I love scallops and these were wonderful. It may be time to go into the restaurant soon. I’ve been hearing good things and these small tastes from events such as these is well, a tease.

As much as I really enjoyed Taste of the Nation and the block party for Concern Foundation, this event was more my style. Less vendors, less people, and a slower pace overall. To watch Hatfield’s plate or any of the other chefs was like watching a dance. A slow, deliberate, carefully paced dance. First the puree, then the grains, then the pork belly, then a bit of salt, then the onions. During this time, I watched someone sneak in and grab a plate before the pork belly was placed. They were vegetarian. I had a moment with Chef Quinn as we shook our heads over those vegs. 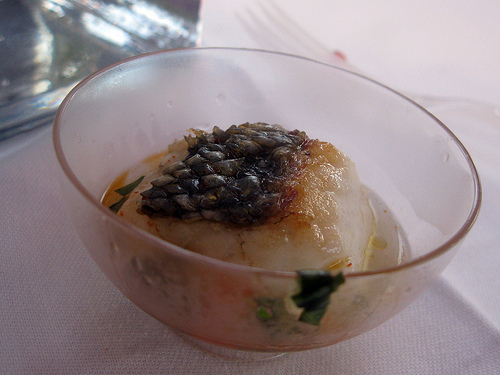 Having just gone to Melisse, I was interested in seeing what Chef Josiah would bring to the table (so to speak). He brought a great fish which was moist and flavorful. I saw what they were cooking on, literally make-shift stove tops. How did they do that? How did they keep the skin so crisp?

Ludobites is enjoying another successful run at Gram and Papa’s. I’m excited to check out 5.0 in a couple of weeks. In the meantime, I got my fix. Chef Ludo brought a “smoothie” which was almost like a gazpacho but had a squid ink vodka jelly and seaweed. It wasn’t so briny as you would think with the components from the sea. I ate like 3 when no one was looking. In my defense, the other tables had wrapped up and I needed it…right? Right? Join the fandom, Ludobitches!

Chef Ben Bailly brought caviar from Petrossian. I would have been very surprised if he didn’t. Nestled on top of a delectable cauliflower panna cotta, it made a smooth base for the rich eggs. 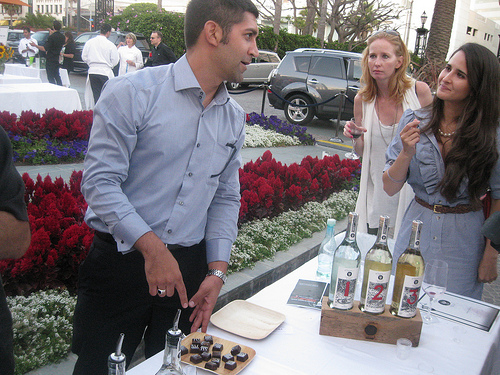 I also had a great salad from Street and a few things from Fig, the restaurant at the Fairmont Miramar. The rabbit pasta dish at the end was so comforting and a great way to end my savory tour.

By the end of the evening, I realized I missed all the tables that had dessert so I popped over to 123 Tequila for their chocolate tasting.