On Sunday, the Noodles Partner and I did another Chiu Chow noodles FACE OFF. This time, it was Kim Ky and Noodle Cafe. When we did the first one with J Noodle and Mein Nghia, I essentially stuck to the meat and shrimp soup noodles so I could do a proper comparison. I did the same thing this time around. I reasoned I could always go back to try the other types.

We started at Kim Ky in Rosemead. They are located in a busy shopping center and there was a tiny bit of a wait but it goes by quickly as everyone just sits down, orders and eats within a few minutes. Regulars hardly look at the menu. The Noodles Partner got the mixed noodles (thick egg and thick rice noodles) with wontons. She gets it dry. I am a soup noodles fan and got mine with thin rice noodles.

There was quite a bit of meat but what I loved about this bowl were the fried onions on top. Add in some satay sauce and you’re good to go.

I also rather liked their wontons which were plump and came in the soup rather than on top of the dry noodles.

Two others were on the FACE OFF with us and one had never been on a crawl of any sort. He wimped out (ha!) and ordered these chive cakes from Noodle Cafe and bought some yang chow fried rice to go. The Noodles Partner and I braced ourselves and ordered our own bowls instead of splitting (as we often do). 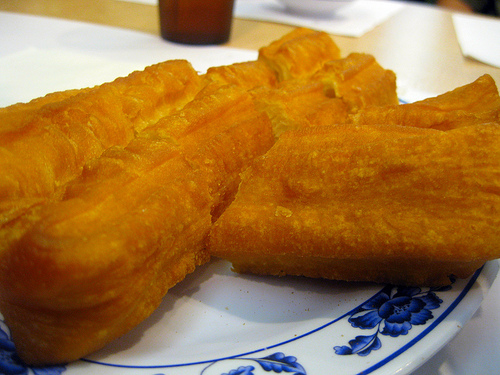 I had noticed that all the Chiu Chow places we went to sold Chinese donuts. I usually eat this with porridge but everyone was eating noodles. What’s the deal? Apparently you make up a dish of sauce and dip pieces of the donut in it. Wait, you meant that satay sauce I’ve been loving at each joint? Okay, let’s get it. 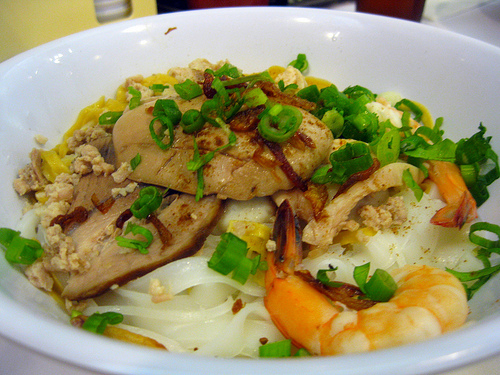 The Noodles Partner usually goes to Mien Nghia or Noodle Cafe. She always orders the wonton noodles but dry. For some odd reason, Noodle Cafe gave her the meat and shrimp. She was forced somewhat to take them but she only grumbled a little bit. Her bowl only comes with one kidney slice but I gave her mine because I don’t like kidney.

Her friend got the wonton noodles. She liked these wontons but I prefer the lighter color wrapper and of course, plumper wontons.

I decided to try getting two types of noodles in my bowl like the Noodles partner. But I got thin and thin- thin egg and thin rice noodles. While I like both, I decided it was too much for me. I wanted to just eat one type of noodle. I wonder though how’d it be to get thick and thin egg noodles? Maybe for the next round of Noodles FACE OFF, Chiu Chow style.’

So who wins my heart for best Chiu Chow noodles in the SGV? I’d go back to Noodle Cafe first (but park on the street!).