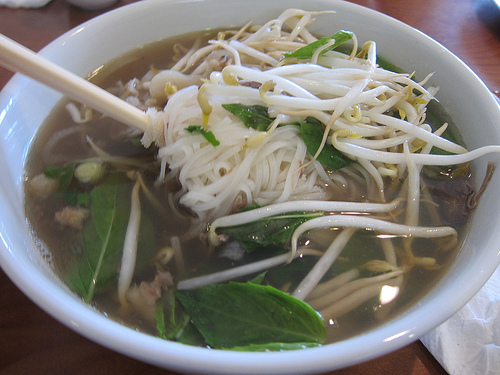 One last meal in SF- ah, what’ll it be? Since I had somewhat of a bender (aka Shaker Face Tour) the previous night, a big bowl of soupy noodles were in order. Carina took me to Kevin’s Noodle House aka Pho Huynh Hiep. I ordered my usual pho order- pho dac biet. The  medium bowl came with the requisite amount of cooked and rare meats, brisket and tripe. I added some of the freshest bean sprouts and gave it a squeeze of lime.

Noodles- woah, Nelly, what’s this clump? The noodles didn’t seem very rinsed. Despite my desperate need to shake the suddenly pounding headache , I couldn’t really deal with the cloudy tasting noodles. I assuaged my hunger with the soup and meat. I was longing for the aromatic pho I had at Pho Kim Long in Las Vegas which eased my morning after boozin’ pain very easily. 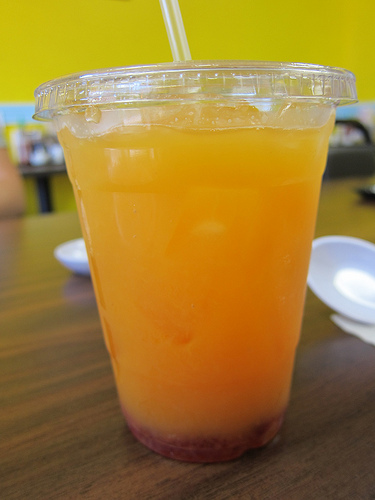 A few hours later, I was back in LA and managed to convince my brother to take me to Pho Kim, a new pho shop I had spotted. Should I have gone to a tried and true pho shop like Pho Filet or Pho Huynh (not to be  confused with the one in SF)? Well, I was feeling like I was up for an adventure.

We walked into the brightly painted shop with some random paintings. I ordered some egg rolls and the orange juice with strawberry jam (where was my flask?) to start. I liked that you could order however many egg rolls you wanted. We chose to get three this time. 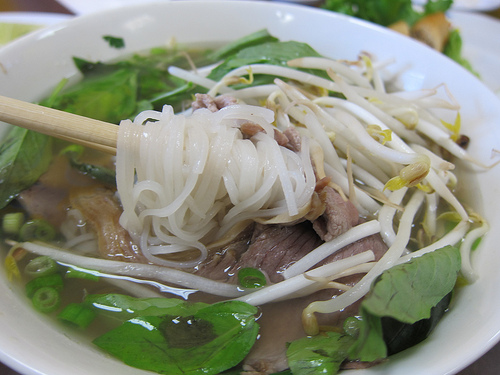 Let’s examine my medium bowl of Pho Dac Biet from Pho Kim. In LA, I noticed they include meatballs in Pho Dac Biet. That’s great since I like (and I’m not even kidding) bouncy balls. Okay, no other way to describe that.

Meat- already digging the meatballs, could use more tripe (but I can never get enough tripe)

Actually, my meal was average but so much better than what I had earlier that morning. I still prefer Pho Huynh or Pho Filet for their pho more. What I did like about Pho Kim was the lack of a wait, the many options for bowl sizes (extra small, small, medium, large, extra large versus just medium or large). Pho Kim also had a nice selection of sauces including one that seemed similar to Chiu Chow noodle joints‘ addicting satay sauce.

Plus they were awfully sweet and eager to please since they just opened. I want to go back to try some of their other noodle dishes.

Only the Minty would have two bowls in one day. Noodle face off!