There are two things in life I consider very dear and would want as my last meal; seafood and noodles. I’ve been doing various noodles battles,  showdowns, crawls and lately FACE OFFs with the Noodles Partner and anyone else who wants in on hot noodles action.

We were off to figure out who has the better Chiu Chow noodles, J Noodle or Mien Nghia in the San Gabriel Valley.

First up was J Noodle in South El Monte. I’ve read good things and the Noodles Partner thought it might be good to try it against one of her faves, Mien Nghia. 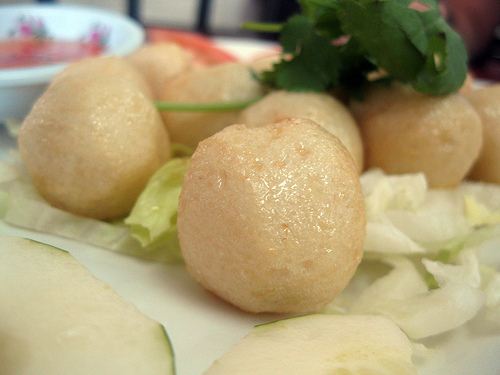 The appetizer to get is apparently the fried fish balls. Although fish balls weren’t the focus of this movie, it always reminds me of the God of Cookery. I actually preferred the unfried fish balls in my soup noodles. But if I were to eat these again, I would skip the sweet and sour sauce and dip them in the addicting satay sauce. 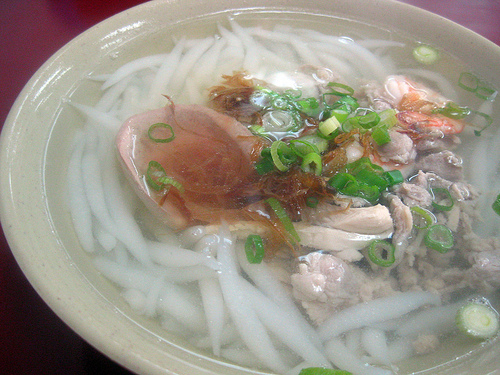 The Noodles Partner was surprised to see her noodles were in a soup but they did easily accommodate her request to have both thick egg and rice noodles in the same bowl. I went for the meat and shrimp noodles with “pure noodles.” I had no idea what pure noodles were but figured they were noodles and they couldn’t possibly be bad. When the bowl arrived, I was delighted because I do like these inch and half long noodles. However, I was disappointed by the skimpy toppings.

The test- no satay sauce sip of the broth. Hm, a bit oily but not bad. In went the satay sauce and it transformed my bowl into something I wanted to eat all the noodles. I had one of the wontons from the Noodles Partner’s bowl and I wasn’t into the thick egg wrapper. There wasn’t much meat. Maybe I’d come back for some dry noodles.  I felt they really cared about us until they thought they could keep our change which would have been an extremely great tip but all we got were a couple of bowls of noodles! There’s not much service in that. 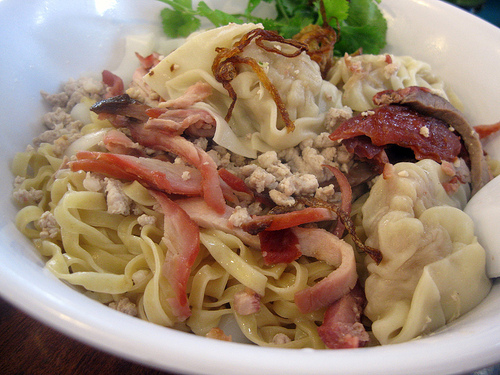 The Noodles Partner is used to going to the Mien Nghia on Valley but we discovered it to be closed and headed back to the one on Garvey. There she was greeted like the regular she is and as soon as we were able to sit down, we ordered. She always gets the wonton noodles here. I decided to stick to the meat and shrimp combo I had earlier even though I was eying the beef stew.

I have to say immediately there was a difference in our bowls. Around the same price, these bowls were hands down more hearty looking to the eye. The wontons were plumper. I could taste shrimp in them!

My bowl of noodles were thick egg noodles with rice noodles. If I were to order again, I would go for the thinner egg noodles only. The shrimp were very fresh and again, after a nice heaping spoonful of satay sauce, the broth was quite lovely. Although I was more or less full from eating at J Noodles a mere 20 minutes earlier, I went to town on these noodles and ate these noodles quicker than you could blink.

I also noted the satay sauce here was lighter in color and had bits of peanuts crushed into the sauce. As a child, I really loved being able to add huge amounts of peanuts to my noodles. Neither Mien Nghia or J Noodles had just jars of peanuts but they did have a whole slew of other sauces.

I was happy this day but the quest for noodles never ends. Next up, we’re trying more Chiu Chow noodles including Noodle Cafe in Monterey Park and if I can convice the Noodles Partner, Kim Ky. — update, read the Noodles FACE OFF between Noodle Cafe & Kim Ky (on Garvey) here.