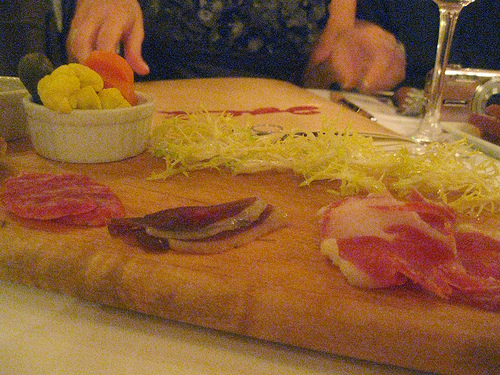 I was invited to check out Joe’s Restaurant in Venice last week for dinner. Joe’s opened in 1991 on Abbot Kinney in the now-trendy neighborhood of Venice. When I arrived, Chef Joseph Miller himself greeted me and I enjoyed him stopping by our table often with explanations and smiles. The atmosphere is very friendly and menu California-French. We also met the new Chef de Cuisine, Kris Tominaga, who mentioned he’ll be cooking at Test Kitchen next week on November 22 along with Phillip Pretty from the London in West Hollywood. They’ll be doing a Land & Sea menu.

Along with freshly baked bread and tapenade, we started with a charcuterie of several meats including pork, rabbit, duck, prosciutto and chorizo. It was quite an indulgent way to start the evening. If I could have had just this charcuterie and Joe’s house wine (the white is quite refreshing), it would have been a fabulous evening. 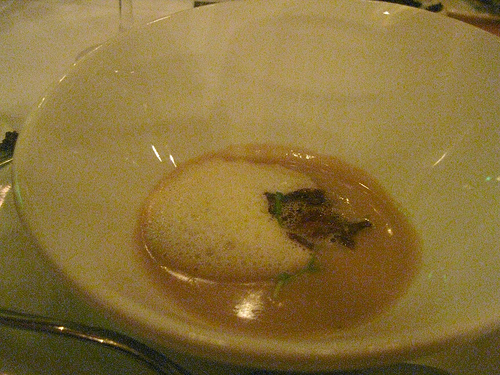 Joe’s offers a tasting menu that changes daily. It’s a quite reasonable $75 featuring finds from local farmers’ markets. I also found it fascinating they get some herbs and vegetables from a school’s garden across the street. This evening, we started with a chestnut soup with parmesan froth and guanciale. 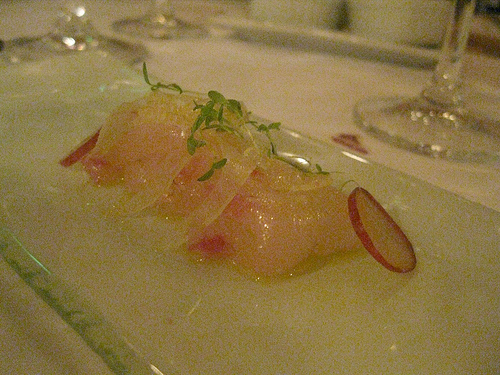 The fluke crudo with finger lime, radish salad, salted grape and saletta was very good. The citrus was light and I thought the thinly sliced grapes were an interesting combination with the fish. 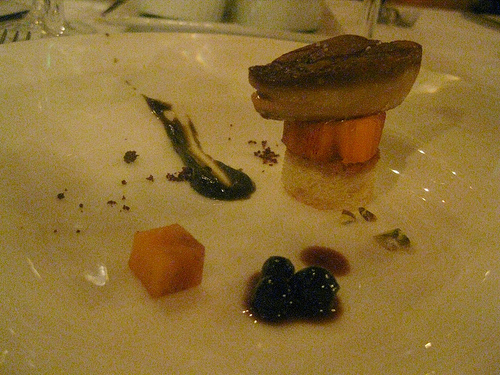 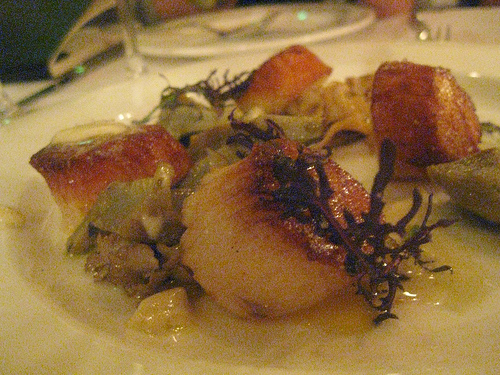 I was just at Ludobites the evening before and was very happy with the scallops and foie gras. I thought it was fun that Joe’s had the same idea (though in reverse). These scallops were large and succulent. I ended up using my scallop to swirl in the puree.

The foie gras was French foie gras which I’ve never had before. It’s more meaty, less fatty and the texture isn’t as unctuous. But somehow, it was more foie gras than any other foie I had before. It was like the essense of foie. The proto-foie, I suppose. 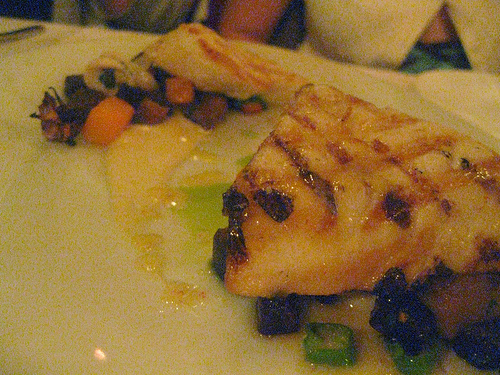 The grilled Fijiian escolar was amazing. Very moist and the squid and pork belly lent a great flavor to the overall dish. Land meets sea, indeed.

Starting with the scallops, we shared the dishes so these are not individual portions. 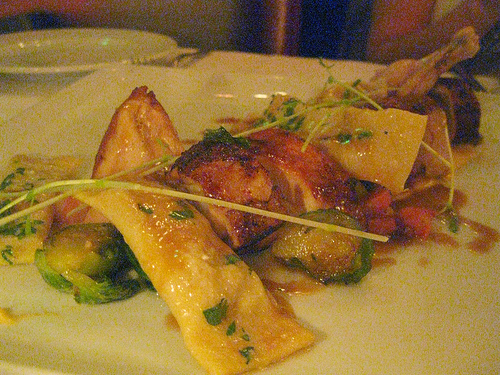 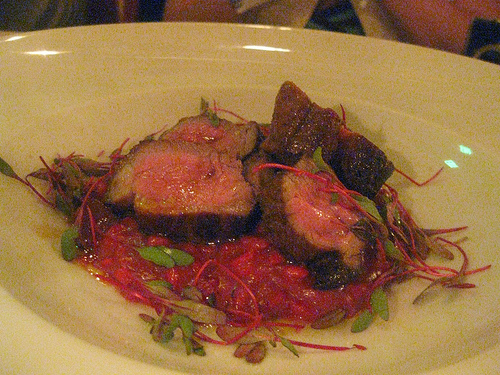 Sometimes I really like complicated food. It shares the skill and care of the chef. Anyone can make chicken but this chicken served with a chestnut-foie gras agnolotti was amazing. There were also Brussels sprouts, pancetta and a rutabaga puree.

If I surveyed the table during each dish, someone would proclaim it was their favorite dish so far. I have to say the beet risotto with the lamb ragout served with the Sonoma lamb sirloin was my ultimate favorite. It was so flavorful and such a pretty dish. 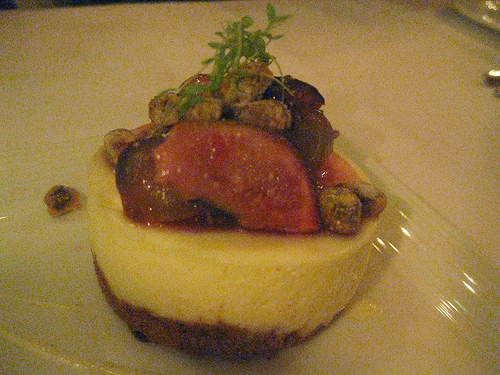 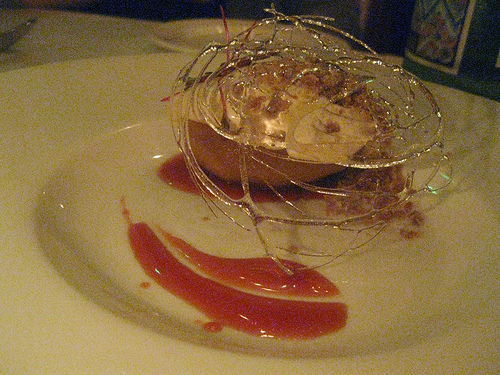 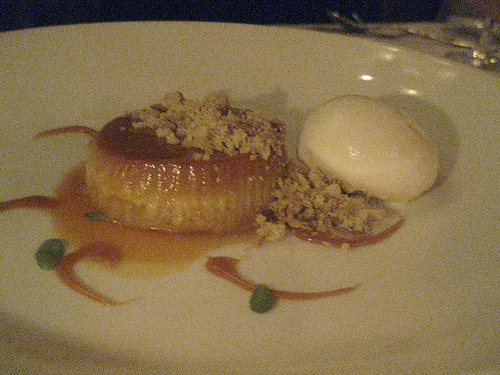 Of the three desserts; mascarpone cheesecake, baked apple and pumpkin creme caramel (flan!), my favorite was the cheesecake. Everything was very good though. None of it was too sweet and it was a perfect way to end the evening.

I really liked the feeling of sitting in an art gallery in the main dining room. The artwork changes frequently and tomorrow there’s going to be a reception for EF Kitchen and Stephen Douglas whose artwork will grace the walls. They’ll have hors d’oeurves and wine from 4 p.m. to 6 p.m.

After First Fridays, check out Joe’s back patio for a special bar menu (happy hour pricing on selected beer, wine and well drinks), Cristoph’s oysters, specialty cocktails, a Mojito punch bowl and a DJ. The next First Friday is Friday, December 3.

Joe’s also has special menus for Thanksgiving, Christmas Eve and New Year’s Eve. The four-course Thanksgiving feast is only $52 and there is quite the variety of dishes to choose from including desserts similar to those I just mentioned.

8 thoughts on “Joe’s Restaurant in Venice”