On our first day in Portland last week, we headed over to Deschutes Brewery after meandering through Powell’s Books. I was trying to be very Portland-y and not use an umbrella even though it felt like we were going to blow away in the rain. As soon as I hung up my coat, I watched a puddle immediately form underneath it. Whee! As it turned out, we arrived on the day Portland experienced the most rain ever on that particular day since they started keeping records of such things. We saw people pulling leaves out of gutters and watched the news in horror. It was going to be a wet one.

What do people do to keep warm? Drink coffee? Booze it up? Huddle around fireplaces? Make out? Okay, maybe we didn’t get to do (all of) those things but we definitely drank warm things, enjoyed cocktails and found some nice fireplaces. It was nice to sit down at Deschutes and delight in happy hour. I’ve had Deschutes’ porter at random places in L.A. before but it wasn’t offered as a happy hour draft that day. So I went with the Cider Cone. It was quite nice.

I knew right away I wanted soup even though I had a giant bowl of pho as soon as I landed in PDX for lunch. I got the French onion soup and the mac and cheese with bacon. The soup was okay. It wasn’t hot enough despite being in a cast iron crock. However, I loved the bacon mac and cheese. Its salty smokey flavor was immediately apparent. 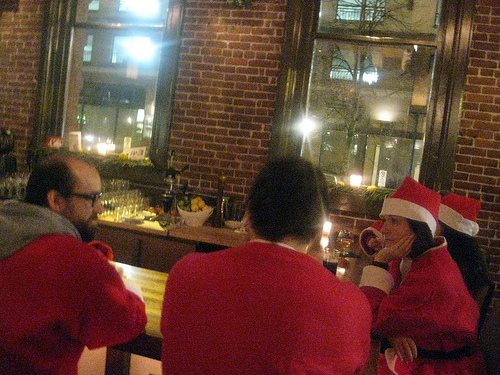 Last Saturday was SantaCon in Portland. We watched Santas roam the streets and found some in the Davis Street Tavern where we decided to stop for happy hour before catching a show at nearby Backspace. With the advice of the server, I ordered the Fish Tale Organic Amber Ale brewed in Olympia. I liked it though I wondered if I should have gone with something sparkling or wine but I figured I was in PDX and should embrace the beer culture as I did with the rain.

Carina ordered the beet salad which I envied and should have ordered over my butter lettuce and spinach salad. It really didn’t make sense. It was just some butter lettuce leaves over a bed of spinach. Her salad was really tasty. 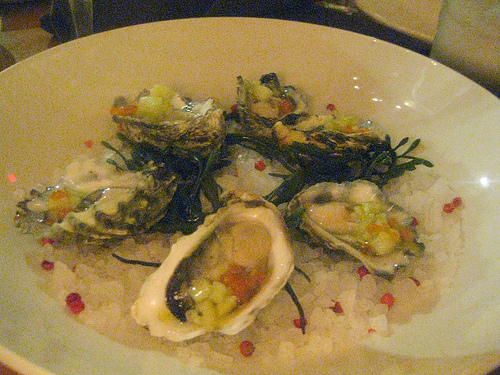 I love seafood and I really love oysters and mussels. When I saw Kumamotos were $1 an oyster during happy hour, of course I ordered half a dozen and a bowl of mussels ($4!!) to boot.  The oysters could have used a more tart mignonette but otherwise, I couldn’t complain much. 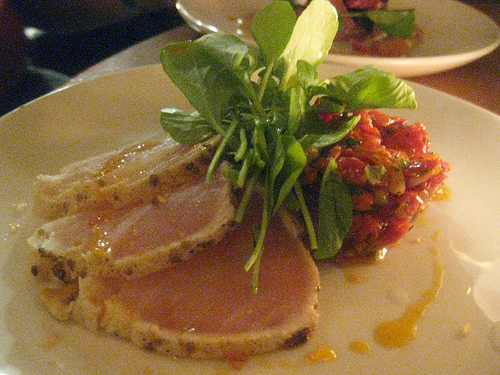 Carina asked for the albacore without avocado so I’ll never know if it would have came in slices (let’s hope) or diced (with the salad?).

What another amazingly cheap happy hour. I’d be happy to go back if only it wasn’t hundreds of miles away.