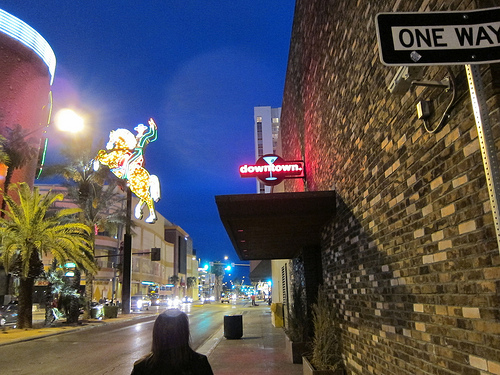 Before I left for Las Vegas, I got a few recommendations for craft cocktail bars. One of them was Downtown Cocktail Room. I had the impression that Vegas isn’t really known for their craft cocktails and woe to cocktailians everywhere. Even this Food GPS interview with Tony Abou-Ganim who forever changed the cocktail scene in Las Vegas left an impression that there is no such “pinnacle cocktail bar.”

I should have paid attention more to the rest of the article where Tony mentions Vesper Bar at the Cosmopolitan but more on that in another post. 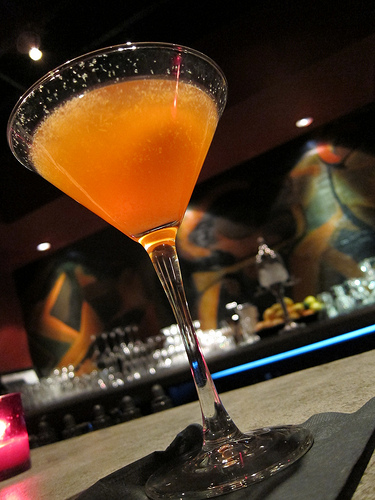 We stopped in DCR before our dinner reservations at B&B Ristorante. We had just enough time for one cocktail which I realize is not a lot of time to get to know a bar or the bartenders who are serious about their craft. There were a few people in for happy hour and only one bartender working. I already knew what I wanted but had the more difficult task of picking out something for my friend who is not a(n) enthusiast like me.

I chose the Wolf in Sheep’s Clothing for my friend V who is fond of sweet things and this cocktail has bourbon, Averna, dark ale and fresh whip. She warned me that whatever I picked for her, I would have to finish but since I’ve been finishing her drinks the last 10 or so years, I didn’t have a problem with that.

I opted for the Cat’s Pajamas (gin, chartreuse, campari, orange, maple). V thought it looked similar to my Sicilian Sunset I had earlier in the day but of course it was completely different. The only thing that would tie all my cocktails this weekend was they were all served up in a martini glass, generally with orange (peel or slice).

I liked the look of this bar with the Gauguin-like backsplash. I did wish I had more time for another cocktail. Happy hour is until 8 p.m. and specialty cocktails are only $7 versus the usual $9 or $10. But more importantly, it was suddenly imperative I seek out other spots. I had Herbs & Rye and Frankie’s Tiki bar on my list but what else? Our bartender Bianca suggested I seek out George at the Vesper Bar at the Cosmopolitan.

DCR has been open for about 4 years. It seems to me that this is the pinnacle cocktail bar. Perhaps it’s not like LA’s Varnish but it’s definitely something worth going to.

The next time I’m in LV, I’d like to get to Herbs & Rye and Frankie’s but also Nora’s, Bar Moderna, Saville Row, Rumor Hotel and possibly a few others now that I know who to ask!