Following a wine tasting at DomaineLA (pics here), we headed over to Baby Blues BBQ in West Hollywood.Years ago, I infrequently frequented a grungy BBQ joint in Venice. I have always loved BBQ and my ex-boyfriend’s dad ran a BBQ joint with a secret sauce recipe. My ex and I would go try out local ‘cue and usually he said it couldn’t compare to his old man’s while I yearned to find something that reminded me of the South.

We decided that the best we could find was Baby Blues BBQ. This was when it was just a shack with a screen-door and an older gentleman working by himself. I’d always get ribs. I was particularly fond of baby backs. Then one day it looked like Baby Blues was closed. A few months went by and it reopened to be rather snazzy. We heard rumors that it was now run by the elderly man’s kids. I have a feeling this was untrue though the new owners, Rick McCarthy and Danny Fischer, come from backgrounds in soul food and BBQ. They must have liked the name to keep Baby Blues.

When I was in the South, I was asked a lot what kind of BBQ I liked whenever I mentioned liking ‘cue. I then learned about Texan, Kansas City and the Carolinas styles. Baby Blues is actually quite perfect for someone like me who likes a little bit of everything. That’s your California, hybrid style. 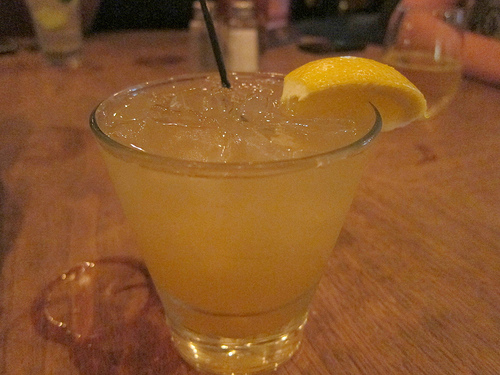 After getting the Daytripper, (Basil Hayden bourbon, grapefruit, honey), we poured over the menu and decided for our group of five we needed to try everything so we got two big platters of meat and plenty of sides.We did start with the appetizer platter, the Tackle Box which included grilled shrimp, wings, hush puppies and fried green tomatoes. 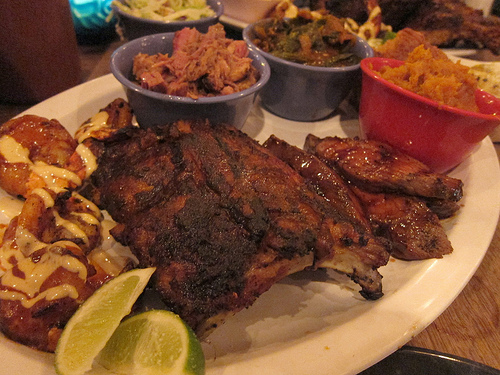 We were slightly more ribs-centric so we wanted to see the difference between the smoked baby backs, the Memphis-style long bone pork ribs and the meaty Texas beef ribs. We also had brisket and pulled pork. I tried all the hot sauces on the table but I think the home-made chili oil in the Svedka bottle was the top choice along with the more tart sauces.

A happy boy and his Carolina-style pulled pork sandwich

The table ended up being split on what our favorites were. I was enamored with the sauteed okra cooked with tomatoes. It was much healthier than the fried okra (I hear some Southerners are grumbling right now). Never fear, the greens, cornbread and multitude of other sides took care of the flavor factor. Namely the 4-cheese mac and cheese took center stage. 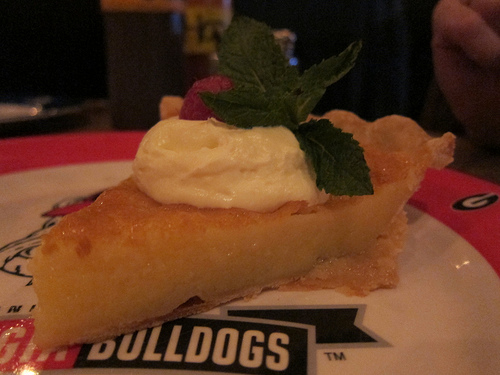 Hello Dessert, my frenemy. How I wish I could ditch you and your loving embrace. Instead, I took a dip with ol’ Buttermilk Pie, had a laugh with Banana Pudding and told ribald jokes with Chocolate Pie. It is a toss-up who I had better times with. The slight tartness of Buttermilk? The creamy familiar Banana or the easy relationship I’ve always had with Chocolate? Get all three and tell that frenemy I said hi.